His full name is Aloysius Snuffleupagus, although his friends call him Snuffy. He is eternally 4 and a half years old,[1] and celebrates his birthday on August 19. Snuffy's best friend is Big Bird, whom he affectionately calls "Bird." His favorite foods are cabbage and spaghetti. In the fifth season premiere, he revealed that he also drinks sassafras tea. He has a little sister named Alice and a friend named Rosalyn.

Mr. Snuffleupagus first appeared on Sesame Street in episode 0276, the third season premiere. When he first appeared, many of the adults assumed that he was Big Bird's imaginary friend, due to a series of coincidences and near-miss encounters that continually kept Snuffleupaguses and humans apart. Big Bird would often try to find ways for Snuffy to meet the adults, but something would always cause Snuffy to leave before the humans could see him. Sometimes, all it would take for the adults to see Mr. Snuffleupagus would be to turn their heads, yet they usually wouldn't do so until Snuffy had already gone.

Various kids could see Mr. Snuffleupagus, some Muppets saw him, and even a few celebrities (including Judy Collins, in a fantasy sequence) saw him, but the major human characters never believed his existence until episode 2096 in 1985.

It takes two people to perform Mr. Snuffleupagus. The person who performs the front also performs the voice. Jerry Nelson was the first to play the character. Most sources (including Sesame Street Unpaved and Sesame Street: A Celebration - 40 Years of Life on the Street) state that back problems caused by the physical stress of the performance forced him to bow out, but in a 2009 interview Jerry Nelson gave a different explanation for giving up the role: "I was not loath to give that character up. But the reasons for giving it up were because at that time we were doing The Muppet Show and he was a real part of the show, and they needed his presence. So they asked if I’d mind giving it up."[3] Michael Earl Davis took over for three seasons (1978–1981[4]), before Marty Robinson became the permanent voice and face of Snuffy. The back of Mr. Snuffleupagus has been performed by Richard Hunt, Brian Muehl, Frank Kane, and Peter Friedman, but since 1979, the regular back-end has been Bryant Young.

Jerry Nelson recalled in the film Muppet Guys Talking that in casting for Snuffleupagus, Jon Stone described the character as "Eeyore-like." Hence, Snuffy originally spoke in a low, sad-sounding tone of voice, which was gradually lightened over time, and his catchphrase was "Ohhh, dear." In the early years of Snuffy's Sesame Street appearances, his entrances were scored by a low-range brass musical cue (composed by Joe Raposo)[5] which could be heard by those who could see him (Big Bird explains to Mrs. Sharp in Episode 0965 that when Snuffy walks, he makes a musical sound). A modified version of this theme appeared on various Sesame Street albums, and was the basis for Snuffy's song-and-dance "Doin' the Snuffleupagus."

Mr. Snuffleupagus lives with his family in a cave located at 456 Snuffle Circle.

In 1992, the producers of Sesame Street tested an episode in which Snuffy's parents get a divorce. After a series of arguments, Daddy Snuffle moved out of the cave, and Snuffy and Alice had to deal with the emotional fallout of a breakup. The episode didn't test well with children, and the producers decided to shelve it. In the context of the show, Mommy and Daddy Snuffleupagus are still married. For more information, see "Snuffy's Parents Get a Divorce".

Before his existence was revealed to the grown-ups on Sesame Street, there were many instances when the adults almost saw Mr. Snuffleupagus, only to just barely miss him. Some even heard him talk, but thought they were imagining things. Here are some of the many close encounters between Mr. Snuffleupagus and others. 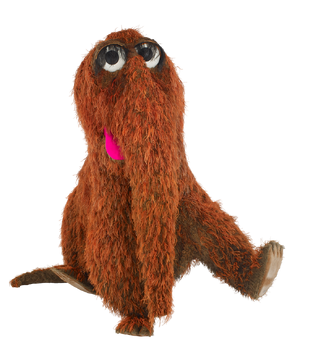 Retrieved from "https://muppet.fandom.com/wiki/Mr._Snuffleupagus?oldid=1305164"
Community content is available under CC-BY-SA unless otherwise noted.