Mrs. Appleby is the only female frog to appear on The Muppet Show.

She debuted in episode 406. In episode 509, she led of a troop of Frog Scouts that counted among its members Kermit's nephew Robin and Gawain on a visit to The Muppet Theatre.

Although Mrs. Appleby would make further appearances, both on The Muppet Show and in feature films, her role in episode 509 would remain her most prominent. 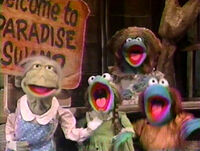 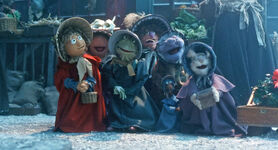 "Scrooge"
Add a photo to this gallery

Retrieved from "https://muppet.fandom.com/wiki/Mrs._Appleby?oldid=1096711"
Community content is available under CC-BY-SA unless otherwise noted.