Mrs. Frazzle is Frazzle's mother. In a 1996 Sesame Street sketch, she takes her son to the dentist and spends some time with him before his cleaning, to calm his nerves about the experience. When the dentist, Dr. Johnson, finally arrives, he addresses Mrs. Frazzle and sets his attention on Frazzle. At first gaze upon the monster's teeth, Dr. Johnson runs away screaming. Mrs. Frazzle deduces that the dentist was more afraid of Frazzle than Frazzle was of the dentist.

Her only illustrated appearance came in Frazzle's Fantastic Day, where she is seen with Frazzle's Dad at the breakfast table, and later being upset at Frazzle's mess in the bathroom, after which she tucks him in for the night saying, "Monsters will be monsters". 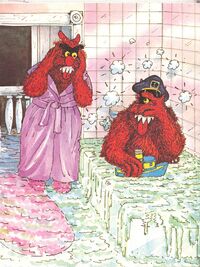