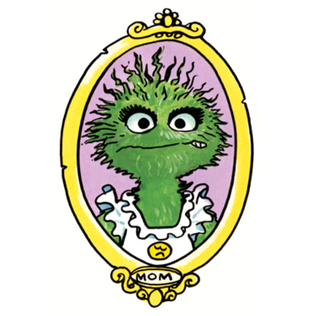 Mrs. Grouch is Oscar's mother. She has visited Sesame Street various times over the years, usually to make sure that her son is still grouchy and hasn't been turned nice by the other residents. In 1993, she also appeared in the special Sesame Street Stays Up Late, communicating by phone with her son and other relatives.

Mrs. Grouch lives in Illinois. Oscar remembers her gift of a tattered sneaker to him as a baby fondly enough to sing about it in his signature song, "I Love Trash". Her name is mentioned in Sesame Street Magazine issue 249 (November 1995).

According to a talk show appearance on Canadian radio, Oscar's father is from St. David's Ridge, New Brunswick and his mother grew up in Nova Scotia. St. David's is near Moores Mills, New Brunswick, a community also mentioned in the appearance. That is a reference to Caroll Spinney's parents.

A running gag between Mrs. Grouch and Oscar seen in Episode 3054, is that whenever Oscar would say "please," she would wash his mouth out with a vanilla ice cream cone; a Grouch reversal of a traditional punishment where one's mouth would be washed with soap when they say a bad word.

Martin P. Robinson performed Mrs. Grouch for her appearances in the 1990s, though in Episode 4237 (2010), she was performed by Leslie Carrara-Rudolph.

Retrieved from "https://muppet.fandom.com/wiki/Mrs._Grouch?oldid=1154951"
Community content is available under CC-BY-SA unless otherwise noted.