Muncha Lisa is the subject of the famous painting by Leonardo da Crunchy, as featured in the Sesame Street special, The Cookie Thief. She is a spoof of the Mona Lisa by Leonardo da Vinci.

Leonardo wants to paint her as she smiles, but she instead begins sobbing. Her mood worsens as Leonardo's assistant Grovero attempts to perk her up. When he collapses under a cow he puts on his head, Muncha Lisa begins laughing at his pratfall. Leonardo has Grovero continue getting crushed as he paints her.

Her portrait, titled the Muncha Lisa, later became the most famous piece of cookie art in the world. It is said that no matter where you stand when viewing the painting, it still looks like she's eating a cookie. 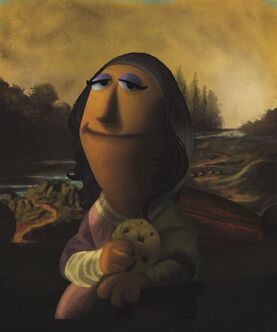 Muncha Lisa in painting form
Add a photo to this gallery
Retrieved from "https://muppet.fandom.com/wiki/Muncha_Lisa?oldid=1096784"
Community content is available under CC-BY-SA unless otherwise noted.