Jim Henson made a series of three commercials in 1969 for Frito-Lay, starring an early version of Cookie Monster, then called Arnold. Henson filmed two of the spots on March 11, 1969.[1]

In the commercials, a bald, humanoid spokesman named Fred tries to explain the difference between Munchos and potato chips: "They're thicker than potato chips, so they're crisper, with more potato flavor." While he's talking, Arnold the Munchos monster invades the scene, growling "MUN-CHOS!" The monster chomps on all the potato crisps he can get his hands on -- and in one commercial, he smashes through a wall to find more Munchos. The ads ended with the Spokesman saying the slogan, "There's more to a Muncho!"

After the three ads were produced, Henson had the opportunity to renew the contract. He chose not to, because at that point he was working on Sesame Street -- and that monster puppet was moving on to the next stage in his career.

The original contract contained a clause for Munchos to take ownership of any characters created for the ads, which Jim Henson disagreed with, insisting on ownership of his characters, and the clause was removed.[2] 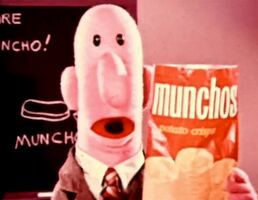 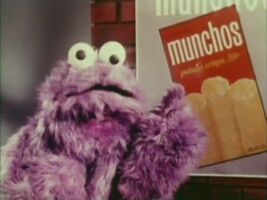 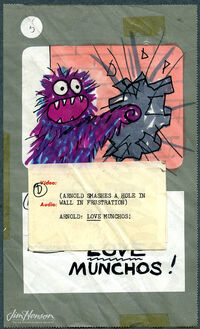