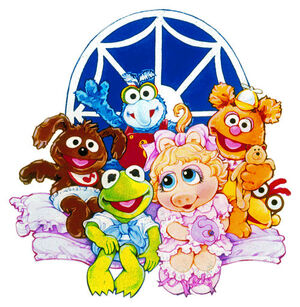 Muppet Babies is an animated series co-produced by Marvel Productions, which ran on CBS for seven years from 1984 to 1990, followed by a reboot in 2018 for Disney Junior.

The series features Baby Kermit, Baby Piggy, Baby Fozzie, Baby Gonzo, Baby Rowlf, Baby Scooter, Baby Skeeter, and Baby Animal under the care of Nanny, as they explore the vastness of their own imaginations. With the exception of Skeeter and Animal, "baby" versions of the Muppets had previously appeared in The Muppets Take Manhattan in a dream sequence that inspired the series (a puppet version of Animal didn't appear until 1987 in A Muppet Family Christmas, and Skeeter was created for the show).

The show's situations and humor relied heavily on incorporating footage from live action film and television productions. Most often this would be clips from movies in the public domain, but extensive use of other properties was also used from the likes of Star Wars and other popular movies, as well as Henson's own The Muppet Show, Sesame Street, and Labyrinth. Live-action cameo appearances included Whoopi Goldberg and Tom Selleck, amongst others.

Hank Saroyan, the series' voice director and story editor, talked about Jim Henson's vision of the series, "He wanted children to believe that anything is possible. That's the only thing that's going to save this planet — the power of imagination."[1]

The series prompted a short-lived spinoff in Little Muppet Monsters, several storybooks for young readers, a series of live stage shows, and a rebooted series in 2018.

The theme song, written by Hank Saroyan and Rob Walsh, featured the Muppet Babies singing about the power of imagination. Originally, the opening featured a middle verse where the babies introduced themselves individually, based on a defining character trait. This part of the opening is cut from most episodes in syndication to make room for more commercials, and the opening reedited to include other clips. The shortened version is 30 seconds instead of 1 minute, and first appeared in season 2's Muppets, Babies and Monsters.

A second opening sequence appears in season 3, becoming standard by season 5. Here, the Babies ride on a flying book, Kermit's tricycle transforms into a speedboat and rocketship, and the Babies play fantasy characters during the middle verse. Nanny's one line had also been rerecorded at this point. This sequence also includes clips from season 2 episodes ("Once Upon an Egg Timer", "Piggy's Hyper-Activity Book", "I Want My Muppet TV", "By the Book", and "The Muppet Museum of Art").

Another version of the opening seen by the fifth season involves a large toy train which the Babies ride, and the Babies building their Muppet Babies logo out of cardboard boxes. It uses clips from season 1 and 2 episodes ("Fun Park Fantasies", "Piggy's Hyper-Activity Book", "From a Galaxy Far, Far Away...", "Out-of-This-World History", and "The Great Muppet Cartoon Show"). It's unclear if there was a longer version of this intro.

A shortened opening seen starting in season 6 combined footage from all three openings, and certain episodes ("This Little Piggy Went to Hollywood", "Once Upon an Egg Timer", "By the Book", "Piggy's Hyper-Activity Book", "The Muppet Museum of Art", and "Masquerading Muppets").

During the first season, the closing theme was an instrumental version of the theme song, with the doo-wop backing vocals only. Starting in the second season, the music was changed to begin with an instrumental version of the Little Muppet Monsters theme song, ending with the doo-wop Babies theme. This longer theme was intended for the hourlong series Muppets, Babies and Monsters, and originally included Little Muppet Monsters stills in the end credits as well. (The opening titles to Muppets, Babies and Monsters had a new theme combining the theme songs to both shows.)

This change to the music stuck, and in future seasons the music still contains the Little Muppet Monsters section. This version of the closing replaced the original closing when aired on Nickelodeon. The closing also showed various stills of the Babies (and the second season closing also included some background artwork from the series). By the time of the third season, several new stills had been added, which were from season 2 episodes ("When You Wish Upon a Muppet", "Fozzie's Last Laugh", "By the Book", "Musical Muppets", and "The Muppet Museum of Art").

After the series ended its run on CBS, reruns aired on FOX from 1991 until 1992, and the first 96 episodes aired on Nickelodeon from 1992 until 1999, and as a syndication package. These same episodes were also rerun on the Odyssey Network in 1999. Although 11 episodes from the last season were not shown in syndication, a number of them were released on video. The show was seen in the United Kingdom on Playhouse Disney from 2005-2007. The shows and the franchise are now owned and controlled by Disney.

Some episodes received cuts and other edits during reruns. For example, The Muppet Movie footage of Kermit the Frog emerging from a saloon in the Ghost Town as originally used to preface a bubblegum showdown between Baby Kermit and Baby Gonzo in "Close Encounters of the Frog Kind" was removed in some reruns. An example of scenes being swapped out includes the "Go bye-bye!" epilogue of "Faster than a Speeding Weirdo"; the original version involves Baby Gonzo and Baby Animal engaged in a game of oversized Tiddlywinks, while the rerun features Baby Gonzo parodying Doc Brown from "Back to the Nursery".