In 1994, McDonald's made a set of toys to celebrate the 15th anniversary of the Happy Meal.

The set included 15 toys based on popular Happy Meal franchises, including: Ronald McDonald, Barbie, Hot Wheels, E.T., Sonic the Hedgehog, the Berenstain Bears, Tonka, Cabbage Patch Kids, 101 Dalmatians, the Little Mermaid, Muppet Babies, Snoopy, Tiny Toons, Looney Tunes, and the Happy Meal Guys. The 15 toys had wheels, and linked up with each other to form a train.

The Muppet Babies toy had Baby Kermit standing on a turntable, holding Baby Piggy above his head. The animated Baby Kermit and Baby Piggy appeared briefly at the end of one of the promotional commercials with Baby Piggy running to be included on the toy franchise train saying "Wait for Moi!" and then screams as Kermit tries to hold on to her. 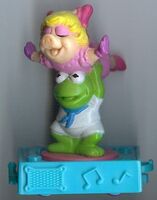 Cartoon Baby Kermit and Piggy in the commercial
Community content is available under CC-BY-SA unless otherwise noted.
Advertisement