Hasbro released a series of Muppet Babies plush as part of its "Hasbro Softies" line in 1985, and a second set in 1993.

The characters were shown with slight variations from their usual appearances as noted below.

A commercial was produced with original animation and voiceover work. (YouTube) 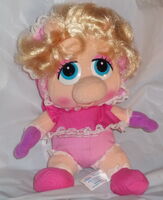 Add a photo to this gallery
Retrieved from "https://muppet.fandom.com/wiki/Muppet_Babies_plush_(Hasbro)?oldid=1386598"
Community content is available under CC-BY-SA unless otherwise noted.