Muppet Classic Theater is a 68-minute direct-to-video feature released by Jim Henson Video in 1994. The production was notable for being the Muppets' first feature-length direct-to-video production (with to date the only other being 2002's Kermit's Swamp Years).

Taking place in The Muppet Theatre, Gonzo and Rizzo host a presentation of six fairy tales performed by the Muppets. Kermit the Frog, Miss Piggy, Fozzie Bear, Robin the Frog, Gonzo and Rizzo star in the various stories. The production also marked the first appearance of Andy and Randy Pig and the Elvises, who later appeared on Muppets Tonight. The framing sequences in the Muppet Theater featured many recycled Whatnots—including Gimley, Wesley, Danny and Esther—along with Chickens, a rabbit, and the monster Bertha.

Written by Jim Lewis and Bill Prady, each story also features an original song. Lewis says that Muppet Classic Theater is his favorite among his Muppet work:

“My personal favorite among my own projects is Muppet Classic Theater which I co-wrote with Bill Prady. It was done relatively soon after Jim's passing, and it was in many ways a re-gathering of the clan. It was fun. Plus it’s just silly, with no great message. I'm fond of it and hope it sees the light of DVD someday.[1]” 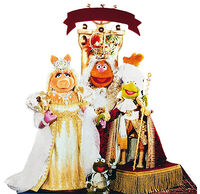