In 1997, Schylling produced a line of Muppet Dress-Up Time toys made from "Magicloth", a flexible fabric that's attracted to magnets. There were two sets -- one for Kermit the Frog, and one for Miss Piggy -- that included a magnetic figure of the character, and ten Magicloth costumes. The sets included the characters' costumes from The Muppet Christmas Carol and Muppet Treasure Island. 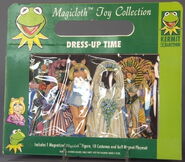 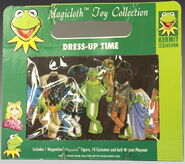 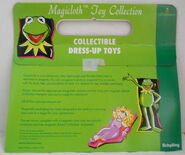 Retrieved from "https://muppet.fandom.com/wiki/Muppet_Dress-Up_Time_toys?oldid=1235464"
Community content is available under CC-BY-SA unless otherwise noted.