McDonald's produced a test version of a Muppet Kids Happy Meal in 1989, featuring Kermit, Piggy, Fozzie and Gonzo riding tricycles. The Muppet Kids line was only released for particular regions, and was not nationwide. The series is extremely rare and sought-after by collectors.

The tricycles could be taken apart into three separate parts, which could be connected with each other to make one large tricycle. McDonald's produced various other Happy Meal series featuring these tricycles (including a series with their own mascot characters, including Ronald McDonald).

The box features a drawing of the Muppet clubhouse. 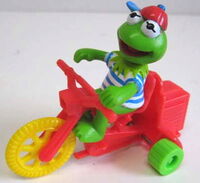 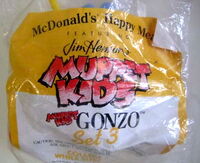 Add a photo to this gallery
Retrieved from "https://muppet.fandom.com/wiki/Muppet_Kids_Happy_Meal_toys?oldid=1096932"
Community content is available under CC-BY-SA unless otherwise noted.