Muppet Labs was the first playset released by Palisades Toys as part of the The Muppet Show's 25th anniversary marketing campaign. The playset, which looked more like the set used in Muppet*Vision 3D than the ones used on The Muppet Show, featured a table with experimenting equipment, big windows, two machines with moving levers, and a big machine with a round window that Beaker could be placed inside. Beaker could also be strapped onto the experiment table.

The Gorilla Detector included with the playset was based on the prop from episode 116 of The Muppet Show. 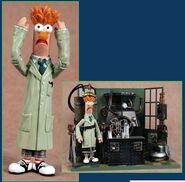