Muppet Time interstitials ran on Nickelodeon when the network began airing reruns of The Muppet Show in 1994. The segments were roughly two minutes in length, and added ostensibly "educational" content to the program for the kids' network. They were written by Jim Lewis and Craig Shemin.[1] Forty segments were produced.[2]

Each segment was introduced by Robin announcing, "It's Muppet Time!" as a Muppet alarm clock would dance wildly while ticking, and then it would break down as its alarm goes off.

Some recurring situations on Muppet Time include the Frog Scouts, Milton, and Kirby and Jeffy, the Two Little Pigs. Robin was the only major Muppet character to appear in these segments, in both the introduction and in the Frog Scouts segments.

The segments later aired on Family Channel in Canada, which aired repeats of Muppets Tonight at the time, and Disney Channel in Australia. 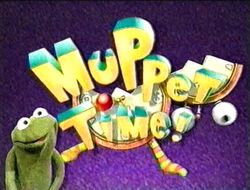 Retrieved from "https://muppet.fandom.com/wiki/Muppet_Time?oldid=1182970"
Community content is available under CC-BY-SA unless otherwise noted.