The Muppet Treasure Island UK premiere was held at the Odeon Cinema, Union Street, Bristol UK, on Friday, May 24, 1996 at 7:30pm, in conjunction with the Bristol International Festival of the Sea.

Following the premiere was the Premiere Party at the Industrial Museum, Princes Wharf, Bristol. The above performers and celebrities were in attendance, as well as Jennifer Saunders, while local news stations filmed interviews. Many fans who had bought tickets were able to meet the performers and get autographs and photos. The performers did not have puppets with them.

On the day leading up to the premiere, Kermit and Gonzo made several appearances at the Festival of the Sea, and filmed several local TV spots.

Tickets to the premiere and after Party were priced at £25 per ticket and were sold in aid of the RNLI (Royal National Lifeboat Institution). The event was organized by Buena Vista International (UK) Ltd. 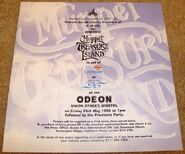 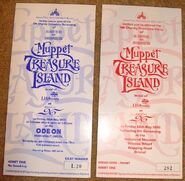 Tickets for the premiere and the afterparty
Add a photo to this gallery
Retrieved from "https://muppet.fandom.com/wiki/Muppet_Treasure_Island_UK_premiere_and_afterparty?oldid=1097061"
Community content is available under CC-BY-SA unless otherwise noted.