Muppet Wiki is a wiki "for everything related to Jim Henson, Sesame Street, and the Muppets." It is hosted by Fandom (formerly WikiCities/Wikia), which runs on (modified) MediaWiki software. This format allows visitors to add, remove, or otherwise edit and change content that has been curated through a system of checks and balances. Muppet Wiki works as a collaborative effort overseen by a team of dedicated administrators and editors working together as a community toward the creation of in-depth encyclopedic articles.

Founded on December 5, 2005 (under WikiCities), Muppet Wiki's database contains 38,880 encyclopedic articles (which does not include wiki discussions, project pages, or redirects). The logo was designed by Scott Hanson and based on a theme from the March photo in The Miss Piggy Calendar 1980. This was incorporated into a new design based on The Muppet Show logo by Julian Kleibeler in October 2010 (including seasonal flair).

Similarly, Jim Henson's work outside of the Muppets is also stressed, one example being technology and characters furnished by Jim Henson's Creature Shop. Of the works created by companies using material furnished by the Creature Shop, only those works produced by The Jim Henson Company are covered extensively. Other examples of non-Muppet Jim Henson content include The Cube and "Tick-Tock Sick."

“Consider, for instance, the astonishing growth and readership at the Wikia site devoted to Muppets. At a little over one year old, the Muppet Wiki has 13,700 articles. Every single one is about Muppets. Interested in an in-depth look at the use of gorilla suits in the Muppet movies? No problem. Just type in "gorilla suits" and enjoy a well-illustrated article that documents, among other things, the names of actors who have worn an ape outfit for Jim Henson. There is a timeline of all things Muppet-related. An entry on China details Big Bird's reception in the People's Republic. The site is astonishingly comprehensive and, perhaps more impressive, comprehensible to a Muppet novice.[16]”

Beginning in October 2010, with a design overhaul of Wikia, Julian Kleibeler started designing various Muppet Wiki logos with seasonal flair. Based on the classic "MUPPET 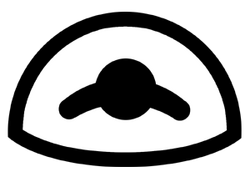 , based on the first Miss Piggy Calendar's "private eye" icon 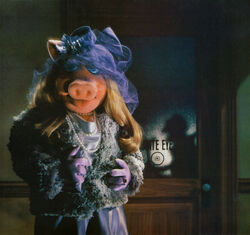 , again designed by Frith (and once again used here on Muppet Babies 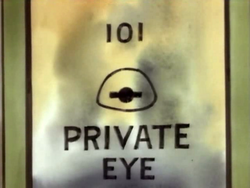