PDP (Performance Designed Products) included the Muppets in their collectible sets of Muppet iPad cases in 2010 and 2011, for sale at the Disney Store and Disney theme parks. Series 1 (2010) included an Animal case, and Series 2 (2011) featured a drawing of Kermit the Frog holding an umbrella. In 2015, PDP released a further set of two eReader cases with images of Kermit and Animal. 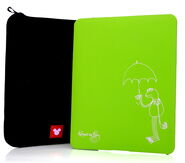 Retrieved from "https://muppet.fandom.com/wiki/Muppet_iPad_cases?oldid=1074338"
Community content is available under CC-BY-SA unless otherwise noted.