American Greetings produced a set of magnets in 2006 to tie in with the Kermit's World Tour promotion. The magnets featured Kermit and Miss Piggy traveling to destinations around the world: New York City (with Piggy as the Statue of Liberty), China, Paris (with Kermit at the Eiffel Tower), Hong Kong, Italy, Mexico, London and Kermit, Texas. The center magnet shows Kermit sitting on a globe and reads, "Kermit's World Tour." 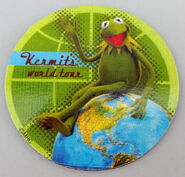 Add a photo to this gallery
Retrieved from "https://muppet.fandom.com/wiki/Muppet_magnets_(American_Greetings)?oldid=1074377"
Community content is available under CC-BY-SA unless otherwise noted.