Ideal Toys produced the first licensed hand puppets of Kermit and Rowlf in 1966. Both puppets are quite scarce.

The Rowlf puppet has a hole in his back for performing. Unlike the real Rowlf, the Ideal puppet has a felt tongue and a tail.

The Kermit puppet depicts his mid-60s design, with a sleeveless red sweater and rounded feet instead of flippers. He has a hole in his back for performing, and a metal rod for moving his arms from the inside. Although Kermit had not formally become a frog at this time, some product descriptions refer to Kermit as a "fanciful frog."

A Snerf puppet was featured in advertisements, but never actually sold.

Four of the Rowlf puppets appeared in an industrial film for IBM, playing back up singers in an imaginary, IBM variety show devised by Rowlf. 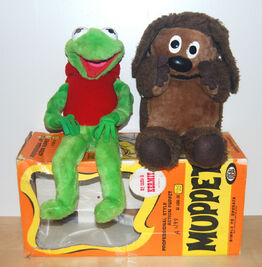 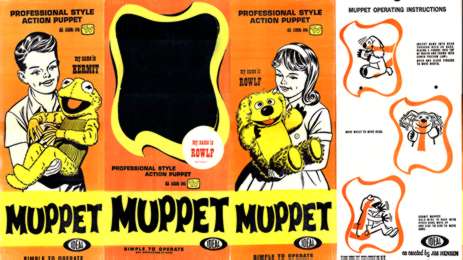 Box packaging, with instructions on how to operate the puppet. 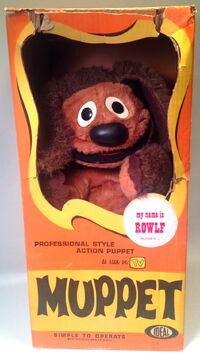 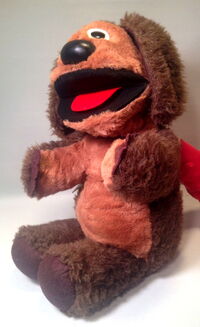 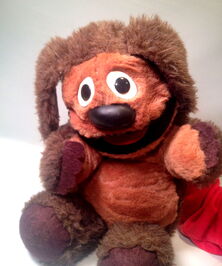 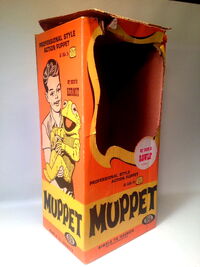 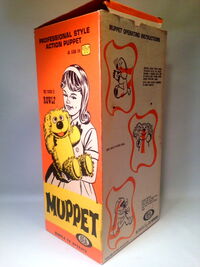 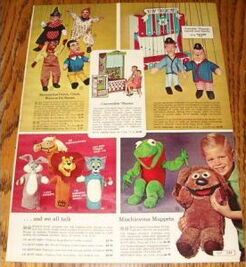 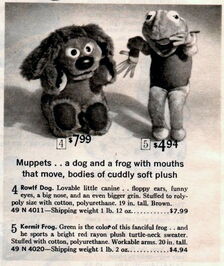 Advertisement from the 1966 Sears catalog 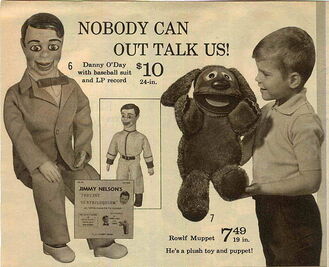 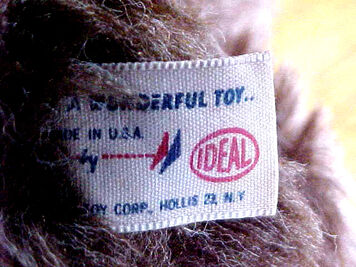 Jim Henson created a 90-second television ad for the Ideal Toys puppets, and brought the same anarchic comedy that he had been using to advertise other people's products to his own.[1]

The ad opens with Rowlf the Dog speaking directly to the viewer: "Hey, you guys got a second? My name is Rowlf, and I'm a Muppet, see? You know the Muppets; they're that nutty bunch of puppets that keep turning up on TV these days? Anyhow, Ideal is making a plush toy of me. And it looks like this." The scene cuts to a Snerf, who pops up and down. "Oh," Rowlf says. "Oh, that was Snerf. He's another Muppet, and Ideal makes a Snerf Muppet too. But the little Rowlf Muppet looks like this."

Instead of Rowlf, one of the Kermit puppets appears. He recites: "I am a Kermit, I'm made by Ideal. I think you'll agree I have real appeal." Rowlf is starting to get frustrated: "Yeah. Well, that was Ideal's Kermit Muppet. But I'm trying to show you the Rowlf." Another Snerf pops in and out of view.

"Now, cut that out!" Rowlf snaps. "Now, here's the Rowlf Muppet." He pulls a puppet Rowlf onscreen. "Go ahead, kid," he says, patting the puppet on the head. "Explain yourself."

"I am the little Rowlf," the puppet explains. "You can work me like a puppet, or play with me like a doll." "Thank you, Junior," Rowlf says, pushing his junior version offstage. "You can go now."

After another Snerf moment, the puppets are back. Three Rowlfs take turns saying, "So buy us at once, we're a bundle of charms." The pair of Kermits finishes: "And if you don't buy us, we'll break both your arms."

"Okay, that's enough!" Rowlf calls. "Friends, buy the Ideal Muppets. The kids'll be screaming for 'em!" The crowd of puppets bursts in on Rowlf, ending the commercial with a raucous squeal.