In 1993, Buena Vista Home Video included free plastic digital watches with the purchase of The Muppet Movie and The Great Muppet Caper on home video. The watches were decorated with drawings of Kermit the Frog, Miss Piggy, Fozzie Bear and Gonzo, in costumes from the movies.

A few commercials were made for the offer, using footage from the films,the It's the Muppets! videos, and of children wearing the watches with newly-dubbed vocals, with a variant of The Muppet Show Theme with newly-dubbed vocals from the characters. One of them, coming out the week the videos were released, had Kermit sing a variation of the theme, while another one featured Fozzie singing about the video-and-watch offer. A shot of The Muppet Show audience was also used. 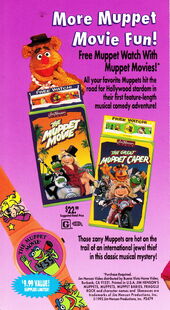 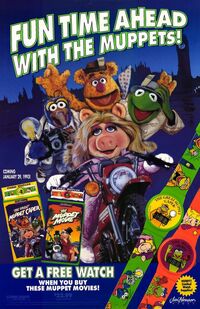 Add a photo to this gallery
Retrieved from "https://muppet.fandom.com/wiki/Muppet_watches_(home_video)?oldid=1097128"
Community content is available under CC-BY-SA unless otherwise noted.