In September 2011, Disney.com launched a new Muppet website at www.muppets.com to promote the new film The Muppets. The site spotlights the films' trailer on a splash page with movie information, plot overview, character bios, photos and more located within the site itself. New transitional videos featuring the characters are featured on the character pages. The pages also reuse character clips from 2008's Muppets.com's "Do Not Touch Button" as hidden Easter eggs. New transitions and hidden clips were added in late September and October, featuring Animal, Fozzie Bear, Gonzo, Kermit, Miss Piggy, Pepe, a penguin, The Swedish Chef, a turkey, Dr. Bunsen Honeydew, Beaker, Jason Segel, Statler and Waldorf, and Scooter. Some of the 2008 Muppets.com videos are used as easter eggs on Gary and Mary's page.

As of 2013, the site has been redone as part of Disney.com's redesign. However, the games, and videos remain. The character descriptions were with those from their Muppets Most Wanted website. They also added Muppet posts on their "Oh My Disney" blog. 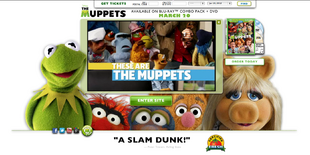 Splash page as of January 2012 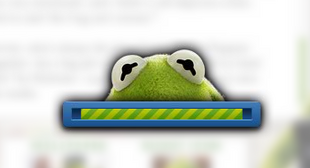 The videos activated by background items in character pages (besides trailers). 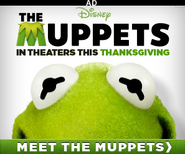 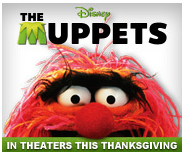