In 2003, McDonald's restaurants world-wide offered plush Muppets with their Happy Meals in honor of the Muppets' 25th Anniversary. The dolls were about 6 inches tall, and had poseable arms. However, the design and set of characters varied based on the country.

The largest set offered was in Australia, where McDonald's offered ten characters: Kermit, Miss Piggy, Fozzie Bear, Gonzo, Animal, Rowlf, Beaker, The Swedish Chef, Sam the Eagle, and Rizzo. In most of Europe, eight of the ten toys were sold, with Beaker and Rowlf missing from the set. In Germany, there were only six dolls offered, with Beaker, Rowlf, Sam and the Swedish Chef missing.

In the United Kingdom, McDonald's offered a set of eight dolls that were larger and higher quality than the other set given away in other countries. This set included Kermit, Miss Piggy, Fozzie, Gonzo, Animal, Rowlf, Beaker and the Swedish Chef; Rizzo and Sam were not included. 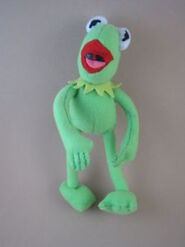 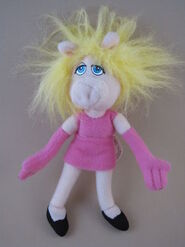 Miss Piggy in a pink mini-dress and gloves

Fozzie Bear with his bow-tie 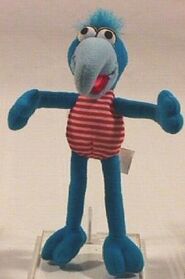 Gonzo in a red-striped shirt 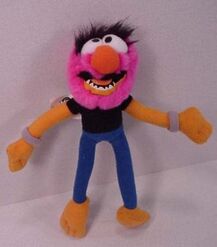 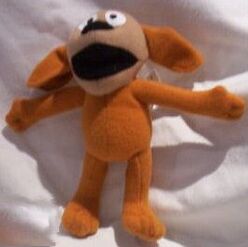 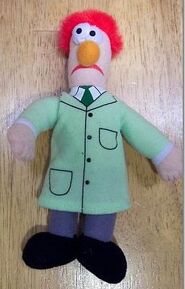 Beaker in a green lab coat 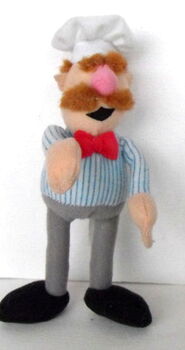 The Swedish Chef in grey pants and a striped shirt 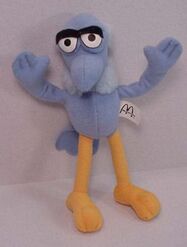 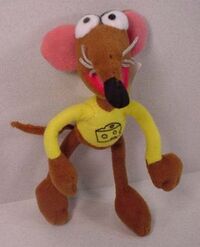 In Germany, the television commercial used a store-bought Kermit puppet made by Igel to advertise the Happy Meal toys. 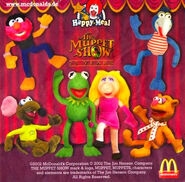 German promotional image
Add a photo to this gallery 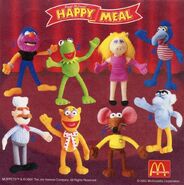 Swedish promotional image
Add a photo to this gallery

In the United Kingdom, the real Kermit appeared in the commercials, performed by Steve Whitmire. 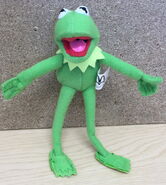 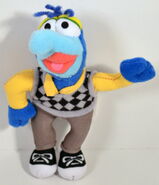 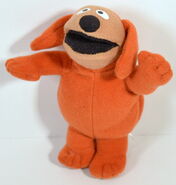 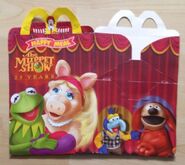 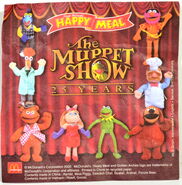 UK promotional image
Add a photo to this gallery
Retrieved from "https://muppet.fandom.com/wiki/Muppets_25th_Anniversary_Happy_Meal_plush?oldid=1276551"
Community content is available under CC-BY-SA unless otherwise noted.