Muppets Courtyard was a Muppet-themed area of Disney's Hollywood Studios in Florida. The primary feature is Muppet*Vision 3D. The naming was used from 2016 to 2017. 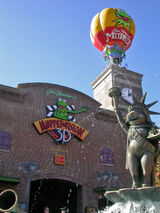 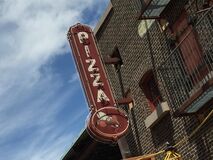 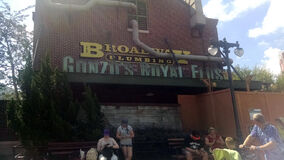 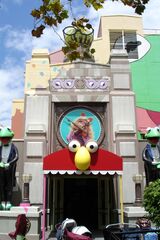 Stage 1 Company Store
Add a photo to this gallery

A statuary of Muppet characters decorated a water fountain in front of when Muppet*Vision 3D originally opened. Referencing the film, Miss Piggy stood in the center as The Statue of Liberty, surrounded by Fozzie Bear with an antique movie camera, Gonzo holding a megaphone, Animal holding the fountain's pipe valve, two rats in a boat, and several fish. As of the first quarter of 2017, all but the Miss Piggy statue has been removed, and the fountain served as a planter, as plumbing work in the area necessitated shutting the fountain down. The fountain was reactivated in December, but only the rats and fish returned. Around the same time, the balloon atop the building housing MuppetVision, once identifiable from high points around the park, was also removed. 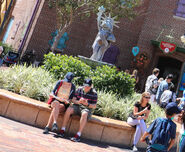 Other items viewable from the courtyard include a kiosk to apply for a MuppetVision fast pass, a black-and-white cutout of Gonzo hanging from the hands of the MuppetVision clock tower, a box of Heckler Crushed Tomatoes hanging from a net next to PizzeRizzo, a Tomato Loading Zone, and the gazebo as seen at the end of the film when a hole is blown through the side of the building. 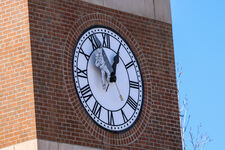 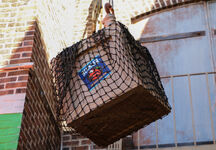 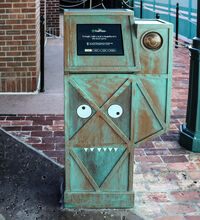 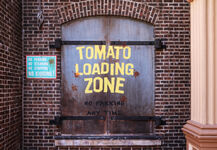 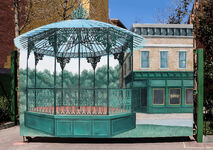 Early plans for Disney MGM Studios included a themed area known as "The Muppet Studios".[1] In addition to Muppet*Vision 3D, the proposed area was to feature another attraction, The Great Muppet Movie Ride, and two restaurants: The Swedish Chef's Video Cooking School and The Great Gonzo's Pandemonium Pizza Parlor. However only Muppet*Vision 3D was completed before the plans were cancelled following the death of Jim Henson and the fallout of the sale of the Muppets to Disney. The area surrounding MuppetVision would be folded into the New York Street area, which would later be known as the Streets of America.

The concept for a Muppet-themed nook within the park was re-explored in 2016 with the re-branding of the area around Muppet*Vision 3D as the "Muppets Courtyard", resulting from the majority of Streets of America being torn down for the Star Wars expansion. The area was added to park maps in the spring of 2016, with other updates (including the opening of PizzeRizzo and the addition of other Muppet-themed decor) arriving throughout the summer and fall of 2016.

However, this wasn't to last as Muppets Courtyard was announced in 2017 to be folded into Grand Avenue, an area based on contemporary Los Angeles that will consist of reworked remaining portions of the Streets of America, with the Muppet Courtyard area taking the new name of "Grand Park".[2] 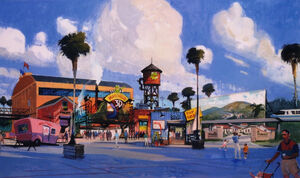 concept art
Add a photo to this gallery

Retrieved from "https://muppet.fandom.com/wiki/Muppets_Courtyard?oldid=1203400"
Community content is available under CC-BY-SA unless otherwise noted.