Muppets Haunted Mansion is a Halloween special released on Disney+ in the United States on October 8, 2021. It runs approximately 50 minutes.

The special takes place on Halloween, when Gonzo is challenged to spend the night in The Haunted Mansion. According to Disney's announcement, the special features "a star-studded Muppets cast, celebrity cameos, all-new music and spooky fun for families to enjoy together."[1]

The special features three new original songs - "Rest In Peace" (interpolating the attraction's trademark song "Grim Grinning Ghosts"), "Life Hereafter," and "Tie the Knot Tango," along with a cover of "Dancing in the Moonlight". An EP of songs from the production was released concurrently with the special's premiere.

In 2022, the special won "Outstanding Children's Program" in the Producers Guild Awards.

Rather than attending the Muppets' annual Halloween party, Gonzo and Pepe are en route to participate in a fear challenge event in the mansion where Gonzo's favorite magician, The Great MacGuffin, disappeared. Upon being dropped off by their driver (Yvette Nicole Brown), Gonzo and Pepe meet the caretaker (Darren Criss), along with several ghosts and singing busts outside the mansion who perform "Rest In Peace."

The duo is then greeted by their "Ghost Host" (Will Arnett) who informs them that Gonzo was invited there to see if he can survive one night inside this haunted mansion. And if they cannot, they will be trapped there forever. While Gonzo claims that he is afraid of nothing, Pepe is scared by everything he sees. The two explore the mansion and, after meeting Madam Pigota, Gonzo and Pepe come across a room full of several ghosts resembling their Muppet friends who put on a vaudevillian-esque show entitled The Mansion Show (featuring At the Dance style jokes, the stand up comedy of Gauzey the Hatbox Bear, and a performance of "Life Hereafter"). The host reappears and informs Gonzo that in order to survive his time in the mansion he must face his fears in Room 999.

As Gonzo is led off to the room, Pepe meets and becomes entranced by the mansion's resident bride Constance Hatchaway (Taraji P. Henson). It is revealed via song in the "Tie the Knot Tango" that she plans to marry Pepe and then, as explained by the ghosts of her past husbands, kill him.

Gonzo enters Room 999 and faces his biggest fear: that no one will like him if he does not continue to do dangerous stunts. Gonzo starts to turn old as his reflection taunts him, but recalling a conversation with Kermit that he had earlier, Gonzo realizes that he can be great by just being Gonzo and, upon looking out at the party he's missing, he realizes that his bigger fear is losing his friends (and no stunt is worth that). Gonzo rejects the allure of the mansion and its challenge and is ready to leave to reunite with his friends.

The host appears to congratulate Gonzo for facing his fears and tells him that he is free to go. But upon realizing that sunrise is approaching and that Pepe is in trouble, Gonzo refuses to leave the mansion without him. With the help of the host's candelabra, Gonzo is able to find Pepe and stop the wedding. The pair jump out the window and make it out of the mansion just as the sun rises. The host meets them outside, revealing himself to be the ghost of the Great MacGuffin, and is impressed that Gonzo was willing to do what he could not - face his fears. The pair are picked up by their driver and head off to meet the rest of their friends for a post-Halloween breakfast, accompanied by the Hitchhiking Ghosts as "Dancing in the Moonlight" plays on the car's radio and a rainbow appears in the sky.

The project initially began in late 2019/early 2020, with full production intended to take place in March 2020. Due to the COVID-19 pandemic, it was suspended until much later that year. The special then began shooting over the course of three-and-a-half weeks in April 2021.[6] Prior to the pandemic shutdown, the proposed version of the special was to run 90 minutes instead of the finalized 50-minute special.[7]

The special is notably the first Muppet production to be primarily shot in an LED Volume, using LED screens to create virtual sets rather than green or bluescreens.[8][9]

The project was announced in May 2021 as part of Disney's "Halfway to Halloween" event with a special video featuring Gonzo and Pepe the King Prawn. (YouTube)

The Fall 2021 issue of Disney twenty-three includes a feature on the special, entitled "A Gonzo Halloween." The article includes interviews with The Muppets Studio‎ vice president Leigh Slaughter, Gonzo, and Pepe the King Prawn.

Chocolate eclairs promoting the special sold at PizzeRizzo starting on September 1st revealed Muppet versions of three of the Stretching Portraits, with Crazy Harry being placed into the role of the Dynamite Man,[10] Link Hogthrob, Dr. Julius Strangepork, and Miss Poogy as the quicksand trio, and Janice as the tightrope walker. A fourth eclair features a Muppet version of the Haunted Mansion's iconic wallpaper.[11]

Further promotion in the Disney theme parks included a "Magic Moment" photo-op at the Haunted Mansion in Disney World, where the Muppet Haunted Mansion logo and Piggy as Madame Pigota are superimposed into the guest's photograph. Exclusive footage from the special was also screened as a part of the Muppet*Vision 3D pre-show starting September 30.[12] In Downtown Disney in California, a promotional display area was set-up featuring artwork, props, and a specially-decorated truck.[13] "The Art of the Haunted Mansion," an exhibition housed at "Great Moments With Mr. Lincoln," in Disneyland, began displaying various props from the special starting in October.

The first footage from the special was featured in a promotional video for Disney+'s "Hallowstream" celebration, published on September 8. (YouTube) A full trailer followed on September 23.

The special received its world premiere at the Disney+ Hallowstream Drive-In on October 7 (a cast and crew-only event), which featured a live introduction by Gonzo and Pepe the King Prawn; a public screening was held on October 9 (paired with Behind the Attraction: The Haunted Mansion and The Muppet Show: "Vincent Price").[14]

On November 21, 2021, Kermit appeared at Destination D23 and showed off a Muppets Haunted Mansion blooper reel, which was released the same day on the Disney+ YouTube account. (YouTube) 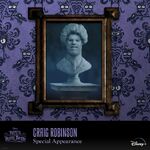 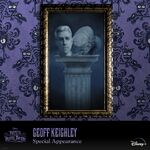 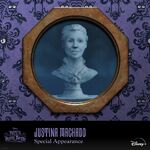 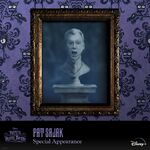 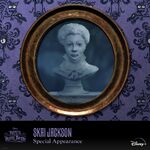 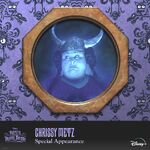 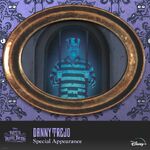 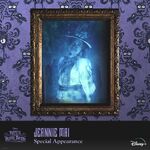 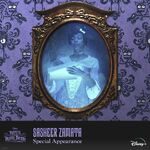 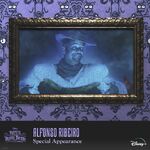 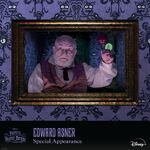 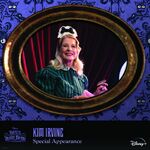 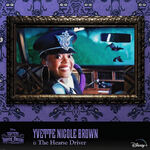 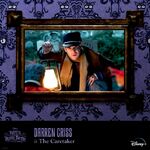 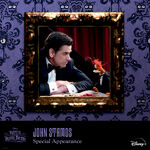 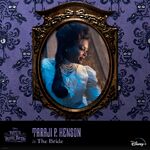 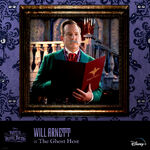 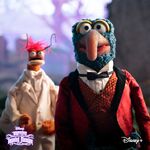 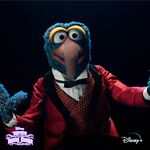 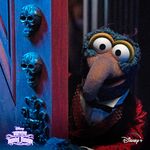 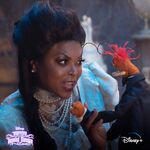 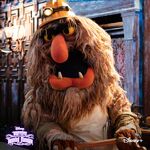 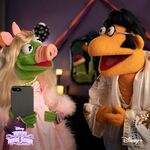 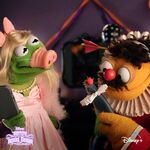 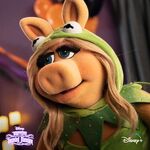 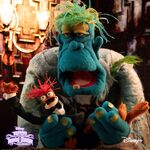 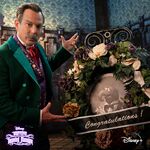