Muppets Most Wanted is an upcoming follow-up to the 2011 feature film The Muppets, planned for release by Walt Disney Pictures on March 21, 2014.[1][2]

A new Pixar short, featuring characters from Monsters University, will precede the film in its theatrical release.[4]

The film has been described as a "comedy caper" set in Europe.[3] Ricky Gervais will star as "a male lead whose intentions are always in question" along with Ty Burrell as a French Interpol agent, Tina Fey as "a feisty prison guard named Nadia," and a "slew of cameos".[5][6][7]

“The idea of this film is that our gang is on this global tour, and we're selling out these grand theaters all over Europe—in Berlin, Madrid, London—but we sort of get into a little bit of trouble when we run across my doppelgänger. He's the world's number one criminal, Constantine, and he happens to look an awful lot like me. I won't tell you any more than that, but let's just say mayhem ensues.[8]” 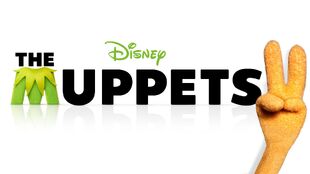 On March 3, 2012 it was announced in Variety that James Bobin and Nick Stoller would pen the screenplay for a sequel to The Muppets.[17] Bobin and Stoller started writing the script on April 12, 2012 which was described as a "comedy caper" set in Europe.[3] In a March 2012 interview, Jason Segel (co-writer, producer, and star of The Muppets) said that he will not return for the sequel, stating: "I have handed off the Muppets to my writing partner [Nick Stoller] and to James Bobin. My goal was to bring the Muppets back and I feel like I accomplished that. I feel like they're in really good hands. But it was half a decade of my life, I just want a little breather, and I know that they're going to nail it."[18] Stoller said the film could possibly have a cameo for Jason Segel,[3] however Segel later stated that he will not appear in the film.[19]

Kermit the Frog and Miss Piggy appeared at CinemaCon on April 24, 2012 to officially announce that a new Muppet movie is in development.(YouTube) The official Muppets Facebook page reported the news with a teaser image for "The Muppets 2."[20]

It was reported in November 4 that producer Todd Lieberman and composer Bret McKenzie will return for the sequel, which began filming in late January 2013 at Pinewood Studio in London.[3] Principal production in London wrapped on April 16, 2013[21] and filming moved to Los Angeles in May 2013.

In February 2013, production designer Eve Stewart let slip that she was working on a scene featuring Miss Piggy's wedding at the Tower of London.[22] In addition to the United Kingdom, filming also took place outside the El Capitan Theatre on Hollywood Boulevard in Los Angeles, to recreate the previous film's ending.[23]

In October 2012, it was announced that Christoph Waltz was originally in negotiations to star as the lead Interpol inspector in the film[5], however in December it was announced that Ty Burrell was signed to the role (Waltz had declined the part due to schedule conflicts).[6] In an interview posted later that month, Waltz said he'd been talking about the movie again and may still appear, but "it might just be one of these little what-they-call cameos."[25]

On December 16, 2012 Ricky Gervais announced that he would star in the film. Gervais tweeted: "I have just signed up to play the lead in the next Muppet movie. I have the biggest trailer but Kermit will spend some time in my sink."[7] Gervais commented on his role in the film on his website: "You may have read that I have accepted the lead role in the next Muppet movie. I didn't so much accept it as jump at the chance. I fucking love The Muppets. (I'll probably have to tone down my language for Disney.) We start filming in January. I can't wait. I'll be hangin' with those cuddly little critters all day."[26]

In January 2013, reports surfaced that Tina Fey was in the final negotiations to play "a Russian gulag prison guard" in the film.[27]

The Muppets 2 announced by Disney with Kermit and Miss Piggy at CinemaCon 2012
Kermit the Frog, Miss Piggy, and Disney's president of production Sean Bailey officially announce production of the film at CinemaCon in Las Vegas on April 24, 2012.
Add a photo to this gallery 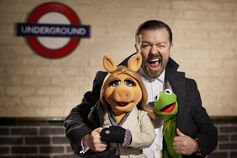 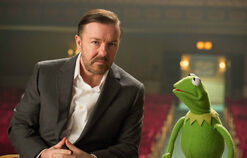 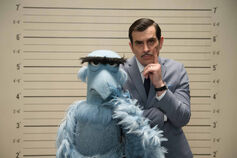 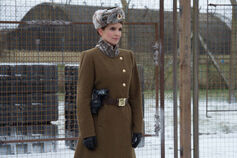 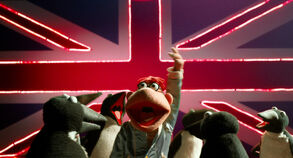 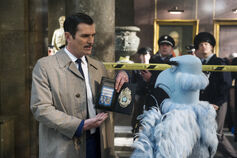 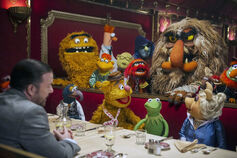 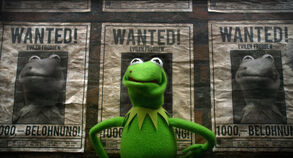 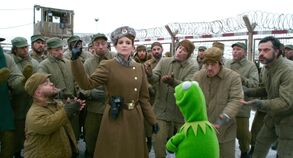 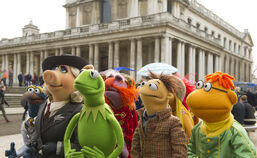 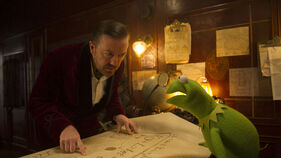 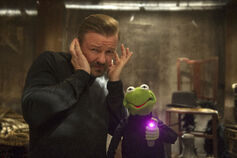 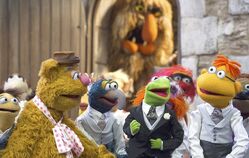 The film's soundtrack is planned for release from Walt Disney Records. A collection of Muppet plush dolls - including a doll of the villain, Constantine - were released by the Disney Store in January. A trick-or-treat bag for the film was available at Disney's Hollywood Studios around Halloween 2013 to promote the film.

The Muppets have made promotional tie-ins and cross-promotional material for Toyota, Wonderful Pistachios, and Club Penguin, as well as plugs on Lady Gaga & the Muppets' Holiday Spectacular and Robbie Williams: One Night at the Palladium. 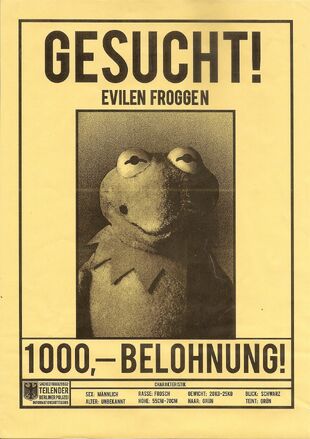