Muppets Now is a short-form series being developed for the Disney+ streaming service to be released on July 31st, 2020.

“In the six-episode season, Scooter rushes to make his delivery deadlines and upload the brand-new Muppet series for streaming. They are due now, and he’ll need to navigate whatever obstacles, distractions, and complications the rest of the Muppet gang throws at him.

Overflowing with spontaneous lunacy, surprising guest stars and more frogs, pigs, bears (and whatevers) than legally allowed, the Muppets cut loose in “Muppets Now” with the kind of startling silliness and heartfelt fun that first made them famous.”

In February 2018, The Hollywood Reporter reported that Disney plans a "reboot" for the Muppets on Disney+, and that a search for a writer was in-progress.[1]

The series would join other original programming for the platform from the company's Marvel and Star Wars properties, as well as new versions of High School Musical, The Parent Trap, Father of the Bride, and Honey, I Shrunk the Kids.

In February 2019, a website called "Splash Report" published an item about the Josh Gad-penned project Muppets Live Another Day, which would follow the events of The Muppets Take Manhattan.[2] The project would subsequently be shelved by September.

In May 2019, The DisInsider reported a series of improvised Muppet shorts would be produced for the platform. The approximate ten-minute shorts would take the formats of "three different segments of a game show, a cooking show, and a talk show."[3]

An official announcement was released on The Muppets' social media accounts on August 23, 2019. A press statement written and signed by Kermit the Frog (with sections redacted in black marker under the legal restriction of Joe the Legal Weasel) announces Muppets Now, an unscripted short-form series featuring celebrity guest stars. A teaser video featuring Kermit and Joe the Legal Weasel was simultaneously screened at the Disney + panel at the D23 Expo.[4]

Kirk Thatcher served as one of the directors for the shorts[5], along with Bill Barretta and directors from Soapbox Films,[6] filmed over the course of six days. They were originally intended as "three types of shows" split between eighteen episodes at ten minutes each for a total of approximately three hours of content.[7] 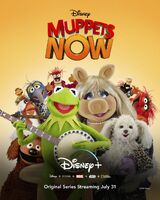 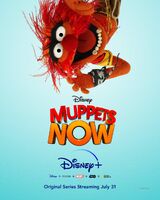 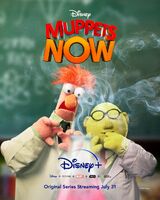 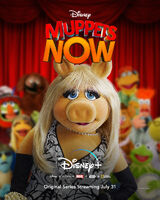 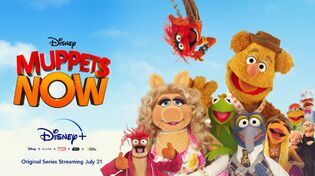 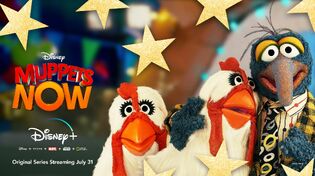