Muppets Studios Presents: You're the Director

Muppets Studios Presents: You're the Director is an interactive VHS tape made for the View-Master Interactive Vision game system in 1988. The View-Master console adds different animations and sound effects to the film, which can be selected by pressing different colored buttons on the remote. The console also switches between two different audio tracks (affecting the story) and adds simple gameplay.

In the game, the player is hired to be the new director at Muppets' Studios. The Muppets try to throw together a movie that's part Ancient Roman epic, part science-fiction musical, and part Western. The player makes choices that affect the movie, trying to earn enough money to keep the Studios afloat.

At the gate of the Muppets' Studios, Kermit is busy talking on his cell phone. The penguins fired the last director because he was 'not fishy enough', so Kermit asks the viewer for help. The player gets to decide to play under the name of Foghorn (a successful director) or Smasher (the worst director in history). For each name, Kermit has a little speech prepared, and a fitting sound effect plays whenever a Muppet pronounces the name throughout the movie.

Kermit takes the player into Studio Not-To-B and introduces the head of the studio Yolanda Steel. Sound effects man Gonzo explains how to choose either a traditional sound effect or an unusual, adventurous noise to start the movie. Kermit introduces the first movie, Anchovy and Cleopatra.

In this Roman epic, Caesar (The Swedish Chef) has just invented the pizza, but hasn't come up with a topping yet. Gonzo, in the role of Mark Anchovy, suggests anchovy and offers the player several choices for his speech. Meanwhile, Cleopatra (Janice) needs the player's help to pick out the right outfit for promoting pepperoni as the new topping. The player gets to decide which topping it will be.

After Dr. Julius Strangepork helps the player build the right space ship, it's time for the second movie: a musical outer space adventure. Singing in the Meteor Shower features Rowlf the Dog, Scooter, Link Hogthrob and Dr. Julius Strangepork rapping aboard the Spaceship Bebop, where they can't seem to agree with the right way to rap. The spaceship is attacked by the evil Monotones, which the viewer has to capture in order to save the grand finale from being monotone.

In Studio Not-To-B, the penguins have blown all the budget on fish and Kermit asks the viewer to look for bags of money in the next movie. High Ruin is a Western flick starring Gonzo as Wyatt Burp, Statler as a gambler, Robin the Frog as a telegram deliverer (in a tuxedo, since there's not enough budget), Janice as the sweet Anna Lee and Lew Zealand as Black Bart.

After the duel scene, various Muppets break down the set. Kermit assures Gonzo that this is all a part of the movie. Depending on the number of retrieved money sacks (cash register sound indicates a complete success, fail music horns indicate a fail), everyone will sing either a success or failure song. 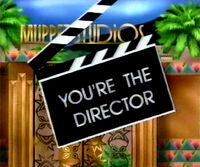 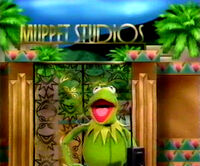 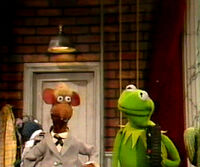 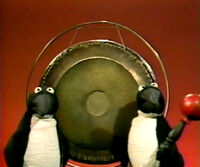 A pair of penguins introduce the films by hitting a gong (with optional sound effects). 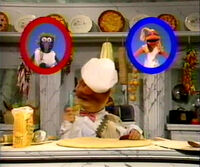 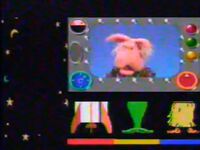 Dr. Strangepork designs the rocketship for the space film. 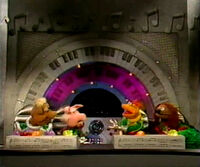 Singin' in the Meteor Shower 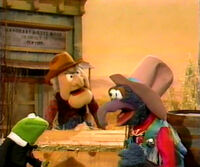 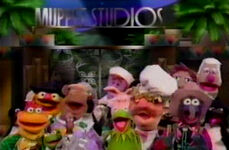 The gang singing. The song sung depends on the amount of collected money sacks. 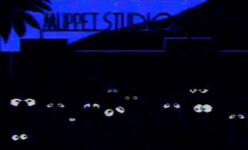 Muppet Studios is shut down. This is only seen if an insufficient amount of money sacks are collected.