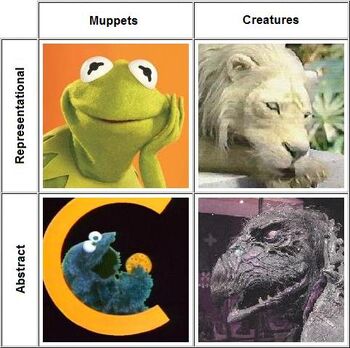 The term Muppet is used on Muppet Wiki to define the group of puppet characters created by Jim Henson and the Jim Henson Company. Although most commonly used to define the characters from the world of The Muppet Show (and its directly related productions) -- characters such as Kermit the Frog, Fozzie Bear, Miss Piggy, and Gonzo –- the term Muppet is also officially used to define many other puppets built by the Jim Henson Workshop, including those for shows such as Sesame Street and Fraggle Rock. The spirit of a Muppet character is stylized, simplified, and symbolic. Kermit the Frog is not trying to pass as a realistic talking frog, but more as an artistic, almost cartoon-like, character that entertains and captivates audiences.

The term Creature is used to define the group of life-like animatronic and special-effect driven puppet characters created by the Jim Henson Creature Shop. This includes characters such as Jen (from The Dark Crystal), Pilot (from Farscape), the animals from Babe, and many others. The art of a "creature" is to achieve a sense of realism and believability. Unlike the Muppets, these characters are trying to get the audience to believe they are real. (Jen is a "real" Gelfing; and Pilot is a "real" alien.) The "Creature" characters are much more life-like, detailed, and technically advanced when compared to Muppet characters.

Characters that fit the definition of classical symbolic puppetry (like a "Muppet"), but were made by The Jim Henson Company after the sale of "The Muppets" in 2004. Only characters made after 2004 by Sesame Workshop and Disney (or for a Muppet "universe" established prior to the sale) receive the "Muppet" designation.

Harris: When I talk with people at Henson Associates now, they practically blanch if you use the term Muppets in connect with The Dark Crystal. What is the difference between what you consider Muppets and what The Dark Crystal is, and have you coined a term for what the creatures in The Dark Crystal are?

Henson: No, we haven't, and a number of people say "you really should have a term for that" but at the moment we're saying creatures.

Harris: Well, what is it that they're not Muppets?

Henson: Well, to me the Muppets are sort of fuzzy, bright colored, cute, lovable caricatures that we know from The Muppet Show. Fraggle Rock also drops under the term Muppets.

Harris: Is it - I remember in the interview that you did with Fred Clarke over Labor Day, he sort of labored the point that The Dark Crystal wasn't heavily into humor. Is that why you don't want it to be called a Muppet movie - because it's more dramatic and adventure-oriented than...

Henson: Well, no, it's not so much the humor, but I have a feeling that the characters are just not Muppets at all. We hesitate to call them puppets even. I think of puppetry as being something more -- see, I love puppetry and what puppetry is, which is related to ... stylization, simplicity, boiling down to - it's a wonderful form and I really love it. But with The Dark Crystal, instead of puppetry we're trying to go toward a sense of realism - toward a reality of creatures that are actually alive and we're mixing up puppetry and all kinds of other techniques. It's into the same bag as E.T. and Yoda, wherein you're trying to create something that people will actually believe, but it's not so much a symbol of the thing, but you're trying to do the thing itself.

Henson: It is tough to tell what is animatronic and what's not. If a puppet is trying to look like it really truly is alive – and if you were to cut it they would bleed – then that's [a creature]. But a Muppet is different - they really are proper puppetry. You know it's felt and ping-pong balls, and that's why you're enjoying it. Animatronic creatures are much more life like and real...animatronics are trying to achieve a very perfect illusion...[The Muppets] are not asking the audience to believe that this is really happening, instead you're saying this is a show, these characters are to entertain you.

Promotional image for Jim Henson's Creature Shop Challenge
Add a photo to this gallery
Retrieved from "https://muppet.fandom.com/wiki/Muppets_vs_Creatures?oldid=1317662"
Community content is available under CC-BY-SA unless otherwise noted.