The Muppets employ various visual gags that puppets might not otherwise seem able to easily achieve. As there is most often only a hand inside the puppet working the mouth, blowing air or drinking liquid requires some trickery hidden from the camera.

The gags are not too difficult to figure out, but on-screen commentary from Kermit in The Muppet Show episode 307 seems to indicate a particular joy held by Jim Henson and his team in deploying them. After Kermit blows out a candle, he looks to the camera and says, "Think about that, folks."

Other gags are more practical. In Cookie Monster's case, the nature of his character requires him eat any number of items on-camera. While his consumption of cookies often includes a large portion of the treat flying almost anywhere but in his mouth, when more solid objects are eaten, a hole in the puppet's mouth accommodates the illusion of devouring the item. 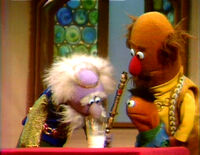 King Morris the Miserable tastes some "ilk" in the Sesame Street story "Ike and the Ilk."

Kermit and Muppy drink milk in The Muppet Show episode 101 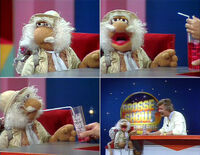 Elmo drinks a glass of water in Elmo Saves Christmas 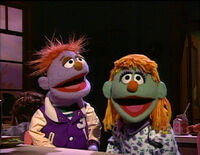 In "Some Enchanted Lunchtime," the girl drinks a glass of apple juice at the beginning 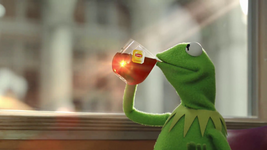 Kermit drinks a cup of (CGI) tea in Lipton commercial 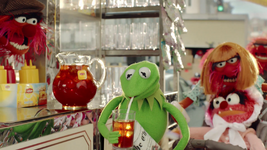 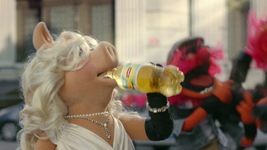 Kermit demonstrates creativity at TED
Add a photo to this gallery

Rowlf the Dog blows a New Year's Eve party favor in the December 31, 1964 broadcast of The Jimmy Dean Show 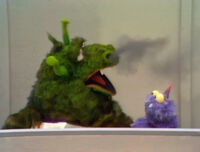 A monster blows smoke from his nostrils on The Ed Sullivan Show.

Oscar the Grouch blows out birthday candles in Episode 0007

Kermit sneezes a flower away in The Muppet Show episode 302

Kermit blowing out a candle in The Muppet Show episode 307

An Arabian Whatnot smokes a hookah in The Muppet Show episode 413.

Ernie blows out a match he used to light a candle on a cake for...

...the letter U, who blows out the candle in a Sesame Street sketch

Bob Cratchit blowing out a candle in The Muppet Christmas Carol

Rizzo blowing dust off a trunk in Muppets Tonight episode 210 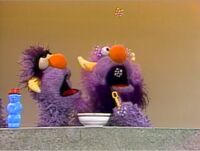 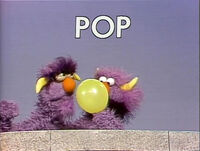 Two-Headed Monster blows up a balloon on Sesame Street 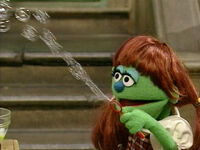 Elizabeth blows some bubbles in Episode 3877 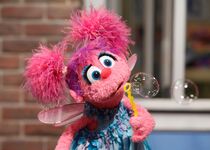 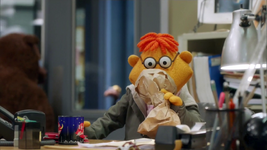 Elmo in the Season 46 opening

Prairie Dawn in Episode 2932
Add a photo to this gallery

Scooter coughs up smoke in the Toyota "Gridlock" commercial 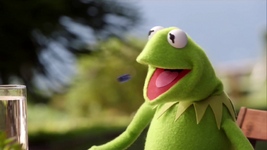 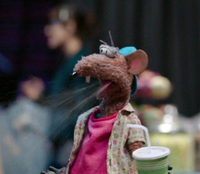 Retrieved from "https://muppet.fandom.com/wiki/Muppets_with_anatomically_functioning_mouths?oldid=1267380"
Community content is available under CC-BY-SA unless otherwise noted.