Sesame Street: Music Player Storybook is a 2007 Sesame Street book and play CD package. The pack comes with a 40-page book full of lyrics and illustrations for each song. It also comes with a special music player and four song discs.

The book, in addition to the lyrics, includes four short stories: "Ernie and Bert: Our Favorite Animals", "Cookie Monster: Food, Yummy Food", "Elmo: It's Fun to Imagine" and "Rosita, Abby, and Zoe: Fun with Friends".

Six songs are included on each of the four discs (24 songs total), the discs can be played using the special music player included in the set. Each song disc includes one special song from the television show ("The Sesame Street Theme," "The People in Your Neighborhood," "C Is for Cookie," and "Rubber Duckie") along with a collection of classic children's songs (such as "I've Been Working on the Railroad," "Sing a Song of Sixpence," and "If You're Happy and You Know It"). 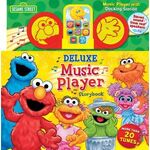