"My Triangle" is a Sesame Street song performed by James Blunt that parodies his hit "You're Beautiful."

Blunt calls Telly to tell him he's lost something special. He can't talk about it, so he sings about it. He explains he's lost his triangle friend and misses them deeply. Telly whips out his triangular telescope and spots James' triangle down the block. 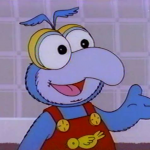