Nastassja Kinski (b. 1961) is a German-born American-based actress.

In 2008, photographer Mike Ruiz paid homage to her famous 1981 portrait "Nastassja Kinski and the Serpent" by the late photographer Richard Avedon, when he photographed a nude Miss Piggy in the same pose.

Coincidentally, Kinski had previously appeared topless on the flipside of a 1980 Miss Piggy poster in German pop-culture/teen magazine POP/Rocky. 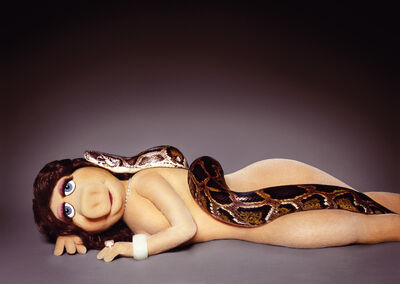 Wikipedia has an article related to:
Nastassja Kinski
Retrieved from "https://muppet.fandom.com/wiki/Nastassja_Kinski?oldid=1074718"
Community content is available under CC-BY-SA unless otherwise noted.