Nebrie are large amphibious creatures that inhabit the swampy regions of Thra. Jen falls into a bog on his quest in The Dark Crystal, after being startled by Fizzgig. Kira, able to communicate with the grub-like creatures, calls below the muck to a mother Nebrie, who lifts him out.

Skeksis consider roast Nebrie to be a great delicacy, often slaughtering the animal for their daily banquets. However the Podlings utilize Nebrie as well. The poddlings domesticate Nebrie for collecting milk. When a Nebrie died the Podlings would waste nothing - its skin would be used to make drums and the patches of fur around its face and ears would be fashioned into clothes for the little Podlings.

In the film's novelization, Aughra serves Nebrie cheese to Jen, which he finds to be delicious.

Kira, Jen and a Nebrie 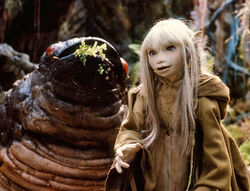 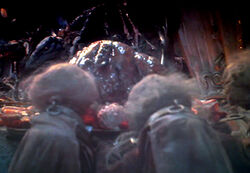