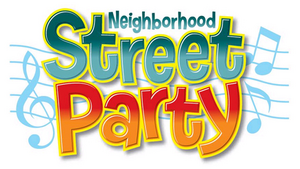 Neighborhood Street Party is a parade that debuted on April 30, 2011 at Sesame Place, replacing The Rock Around the Block Parade. It features the Sesame Street characters riding on floats, with some themed after famous locales like Hooper's Store, and stopping to interact and dance with guests along the parade route. A nighttime version was introduced on June 18, 2011. The parade was directed and written by Sherri-Lynn Draper.

In 2018, the parade was repurposed and renamed the Sesame Street Party Parade for the SeaWorld parks in San Antonio and San Diego. The floats in this version were reconstructed and some of the characters moved places. Murray Monster is not featured, and sections of the soundtrack were redubbed with newly recorded lines from Elmo and Abby Cadabby. This version of the parade premiered with the Sesame Street themed area in SeaWorld Orlando in 2019, with some floats excluded.

“Sesame Place will debut a brand-new parade in 2011. The “Neighborhood Street Party” parade will feature three show-stopping performances that help kids learn about letters, numbers and friendship. With 11 larger-than-life floats, the parade is a neighborhood celebration filled with fun, friends and memories. During the "Neighborhood Street Party" guests will experience an energetic neighborhood block party on iconic Sesame Street with all of their favorite friends, including: Elmo, Count Von Count, Bert & Ernie, Abby Cadabby, Zoe, Cookie Monster, Rosita, Big Bird and Telly. The parade will feature familiar contemporary tunes, as well as, Sesame Street favorites that are sure to get everyone joining in the fun.”

The parade contains nine floats. The characters however will move from float to float so they don't have a specific location. 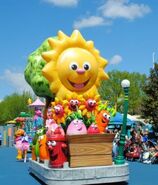 As part of The Count's Halloween Spooktacular, the parade transforms into a Halloween parade during the month of October and features floats and music for the season. Many of the walk-around characters also appear in Halloween costumes for the parade (such as Elmo as an astronaut, Rosita as Little Red Riding Hood, Bert and Ernie as pirates, Abby Cadabby as a princess, Zoe as a witch, Grover as Super Grover, and Telly as Indiana Jones).

Retrieved from "https://muppet.fandom.com/wiki/Neighborhood_Street_Party?oldid=1258317"
Community content is available under CC-BY-SA unless otherwise noted.