The characters have visited Central Park in Manhattan on various occasions, notably the 25th anniversary special Sesame Street Jam: A Musical Celebration. The 35th anniversary special, What's the Name of That Song? was also partly filmed on location in New York. New York City's Metropolitan Museum of Art was featured as the backdrop for the TV special Don't Eat the Pictures.

In 1983, Gordon and Mr. Snuffleupagus ran the New York City Marathon in episode 1836. Also in the 1980s, the show's opening title sequence featured footage of kids running through a unique architectural design in the form of a waterfall that runs behind the McGraw-Hill building on the Avenue of the Americas (6th Avenue). The waterfall is intercut by a walkway that connects a plaza that runs between West 48th & 49th Streets.

New York City served as a backdrop in The Muppets Take Manhattan. Locations used in the film include Central Park, the Empire State Building, Sardi's, Bergdorf Goodman and Broadway. Then-mayor Ed Koch made a cameo appearance.

Many Henson productions have been shot in New York, including Sesame Street, Bear in the Big Blue House, the "Land of Gorch" segments for Saturday Night Live, and A Muppets Christmas: Letters to Santa. 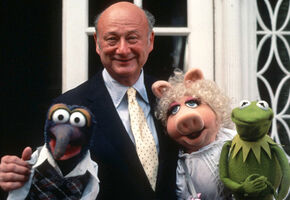 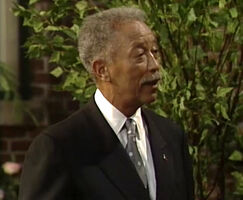 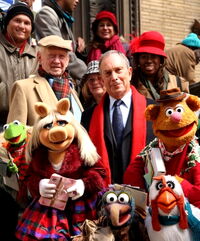 Wikipedia has an article related to:
New York City
Community content is available under CC-BY-SA unless otherwise noted.
Advertisement