The New York State Museum opened in is current incarnation in 1976 in Albany, New York. The museum holds artifacts of cultural, natural, and geological importance to the state.

In 1981, the museum added a Sesame Street feature to their "New York Metropolis Hall" area. The feature, originally made for the Smithsonian Institution's own Sesame Street exhibition, consists of the main facade of the 123 Sesame Street stoop, Oscar's trash can (with an Oscar the Grouch poser), and Big Bird's nest. A video monitor shows highlights from the series.

To celebrate the feature's addition to the museum, Big Bird and Northern Calloway (David) appeared for a live event held outside the museum facilities in Empire State Plaza. 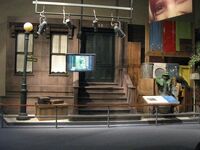 Big Bird and Northern Calloway celebrate their addition to the museum.
Add a photo to this gallery

Wikipedia has an article related to:
New York State Museum
Retrieved from "https://muppet.fandom.com/wiki/New_York_State_Museum?oldid=1229367"
Community content is available under CC-BY-SA unless otherwise noted.