Nick Offerman (b. 1970) is an American actor, writer, and carpenter widely known for his role as Ron Swanson on the NBC sitcom Parks and Recreation (with Amy Poehler, Aziz Ansari, Adam Scott, Aubrey Plaza, and Rashida Jones).

In 2014, Offerman appeared in "W-ORD Channel 7 News with John Oliver & Cookie Monster," a video distributed by Mashable in support of Sesame Workshop's "Words Are Here, There, and Everywhere" initiative. His real-life wife Megan Mullally provided the off-camera voice of his wife in the video.

Offerman guest starred as himself in The Muppets episode "Bear Left Then Bear Write."

At SXSW 2017, Offerman and Director Brett Haley took a picture with Cookie Monster.[1] Offerman later appeared with the Sesame Street Muppets in an episode of The Kelly Clarkson Show. 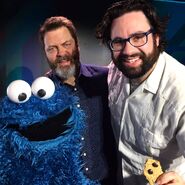 Wikipedia has an article related to:
Nick Offerman
Retrieved from "https://muppet.fandom.com/wiki/Nick_Offerman?oldid=1289596"
Community content is available under CC-BY-SA unless otherwise noted.