Nitya Vidyasagar played Leela, a young Indian-American woman who ran the local laundromat on Sesame Street. She made her debut on the show in Season 39 and left the series after Season 45. She did make a comeback appearance in Sesame Street's 50th Anniversary Celebration.

Vidyasagar was born in Oman, moving to India when she was a year old, and to the United States when she was twelve. She speaks Hindi and Telugu as well as English.

The part of Leela wasn't originally written with an Indian-American actress in mind. "It was incidental," Vidyasagar says in an article in India West. "The casting notices said nothing of ethnicity." She became the first major Indian-American character on the American Sesame Street: "This is a big deal for me, and for the Indian-American community... and it shows that India has a growing place in the world profile."[1]

In April 2012, she appeared with other members of the human cast of Sesame Street at Jim Henson's Musical World at Carnegie Hall. 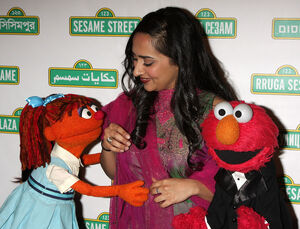 Vidyasagar with Chamki and Elmo at the 2008 Annual Sesame Workshop Benefit Gala.
Add a photo to this gallery

Retrieved from "https://muppet.fandom.com/wiki/Nitya_Vidyasagar?oldid=1226360"
Community content is available under CC-BY-SA unless otherwise noted.