Old MacDonald had a farm. He has appeared on Sesame Street many times over the years, beginning in the 1980s, and has been performed by Richard Hunt, Martin P. Robinson, Jerry Nelson, and Joey Mazzarino. He usually has a slight Scots accent, and appeared in two Sesame Street News Flash sketches in which Kermit the Frog investigates events on the farm. In Episode 2683, it is said that his full name is Angus MacDonald, and his daughter Young MacDonald is the focus in Episode 2913.

Old MacDonald was also seen as the host of "Mac TV," where he introduced such barnyard music videos as "A New Way to Walk" by the Oinker Sisters. He has also occasionally been involved in street storylines, such as Episode 3750, where Shelly the Turtle wants to join his farm menagerie and be added to the song. He also made brief cameos in Sesame Street's 50th Anniversary Celebration. 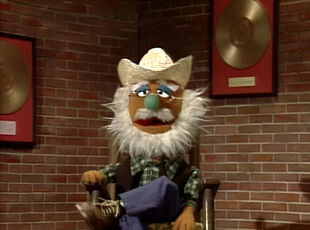 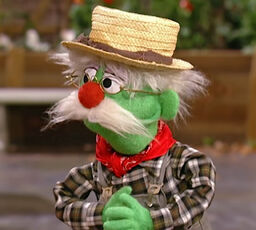 Old MacDonald as a Green Anything Muppet