Old MacDonald had a farm. He has appeared on Sesame Street many times over the years, beginning in the 1980s, and has been performed over the years by Richard Hunt, Martin P. Robinson, and Joey Mazzarino. He usually has a slight Scots accent, and appeared in two Sesame Street News Flash sketches in which Kermit the Frog investigates events on the farm. 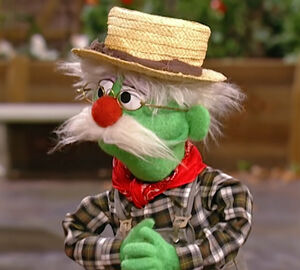 Old MacDonald as a Green Anything Muppet
Retrieved from "https://muppet.fandom.com/wiki/Old_MacDonald?oldid=824648"
Community content is available under CC-BY-SA unless otherwise noted.