Sesame Street: Old School, Volume 2 is a DVD set collecting episodes and skits from the early seasons of Sesame Street, released in 2007.

This set is a follow-up to the first installment, which was released in 2006. The Old School sets are marketed as a nostalgia set, aimed at teenagers and adults who remember the series from their childhood. This set contains a 12-page booklet with behind-the-scenes information and photos, and a special collectible animation cel from "Pinball Number Count."

Each episode features a special introduction by the Typewriter.

Easter egg: A girl prepares for the snow (First: Episode 0413)

Easter egg: A boy gets lost and a mysterious man teaches him to think backwards. (First: Episode 0408) 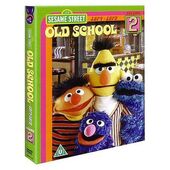