Olivia Wilde (b. 1984) is an actress and fashion model best known for her role as Dr. Remy Hadley in the FOX series House with Hugh Laurie and played Quorra in Disney's Tron: Legacy with Jeff Bridges.

Wilde met Rowlf the Dog backstage at Saturday Night Live when Jason Segel was hosting the show to promote the new Muppets movie. She was about to make a cameo appearance in the SNL Digital Short that same night. Wilde commented on her Twitter, "Met Rolf the dog backstage at SNL and he put his paw around me... Thus topping my Bill Clinton shoulder squeeze. Swoon."[1]

Wilde and partner Jason Sudeikis appear as guests on The Not-Too-Late Show with Elmo in 2020. 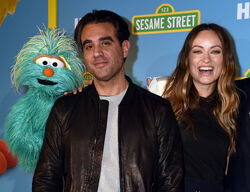 Wilde with Bobby Cannavale and Rosita 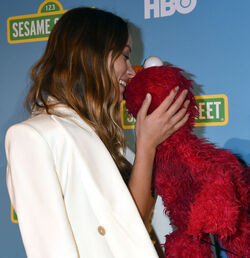 Wilde with Elmo
Add a photo to this gallery

Wikipedia has an article related to:
Olivia Wilde
Retrieved from "https://muppet.fandom.com/wiki/Olivia_Wilde?oldid=1276552"
Community content is available under CC-BY-SA unless otherwise noted.