Omar is an abstract character with a beak-like papier-mâché face who appeared on Sam and Friends. He was created in May of 1955.[1]

In one appearance, the Old Black Magic sketch, Omar serves as the show's announcer, reciting the opening and closing tags and attempting to deliver the Esskay Meats pitch.

One of Jim Henson's first live-hand Muppets, Omar was utilized in a sketch performed at the US World Fair, held in Hamburg, Germany in 1961, where he plays a chef who uses nonsense ingredients for a recipe that ends in an explosion.[2] Footage of this sketch was restored from the Henson Archives and shown at Museum of the Moving Image in May 2016.

Since 2015, the Omar puppet is on display at the Center for Puppetry Arts as part of their permanent Worlds of Puppetry exhibit. 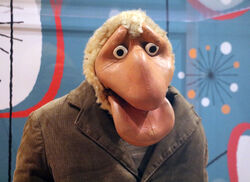 Retrieved from "https://muppet.fandom.com/wiki/Omar?oldid=1178646"
Community content is available under CC-BY-SA unless otherwise noted.