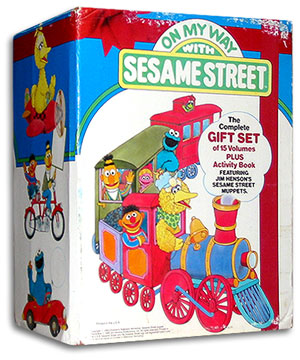 Unlike the previous two series, these volumes did not follow the featured letters and numbers. Focusing less on ABCs and 123s and more on daily life and growing, themes such as families, outdoors, occupations and seasons of the year were incorporated into the format. In addition, each volume was prefaced with a parents' guide by the editors.

For a full list of all 15 volumes, see the On My Way with Sesame Street category.

Retrieved from "https://muppet.fandom.com/wiki/On_My_Way_with_Sesame_Street?oldid=1097893"
Community content is available under CC-BY-SA unless otherwise noted.