Kermit and Miss Piggy appeared in a video segment on the live YouTube broadcast 1D Day showing what's in Miss Piggy's dressing room asking what One Direction has in their dressing rooms.

On December 11, 2013, the official Sesame Street account on Twitter released a photo of Big Bird with the band. It was captioned: "Guess who's 1D's "biggest" fan? (And thanks for visiting Sesame Street, @onedirection!)"[1] Sesame Street later posted a Vine of Big Bird with the members of One Direction announcing that the group will appear in the show's 45th season, performing "What Makes "U" Useful" (spoofing their own "What Makes You Beautiful").[2] MTV feared for Big Bird, asking "How's he gonna deal when One Direction's other self-proclaimed "biggest fans" -- aka ALL OF THEM -- track him down?"[3] In an interview, Joey Mazzarino stated the band's representation directly contacted the show, asking to spoof one of the band's songs.[4]

The group with the Sesame Street Muppets and Matt Vogel 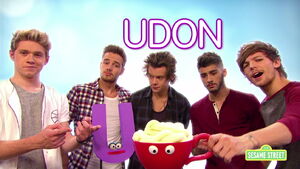 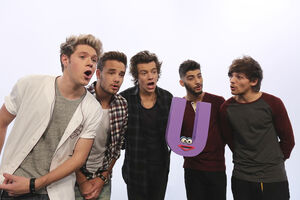 Retrieved from "https://muppet.fandom.com/wiki/One_Direction?oldid=1243466"
Community content is available under CC-BY-SA unless otherwise noted.