One to One was a Julie Andrews TV special featuring the Muppets. It aired on December 15, 1975 on ABC.

Julie Andrews and Stan Mooneyham host this hour-long infomercial for WorldVision, which is a little more grim than happy (as opposed to what the ad states - see below). The Muppets appear around the middle:

Kermit conducts "Stars and Stripes Forever," as performed by the Korean Children's Choir (which includes a few off-key Whatnots).

On a farm setting, Brewster (a farmer this time, but still a "philosopher"), converses with Stan Mooneyham, which leads into a song, "The Chain of Life," featuring the Choir, as well as Rover Joe the Hound Dog, T.R. and Catgut (and some chickens) from The Muppet Musicians of Bremen.

Then Kermit tells a story of the sun-deprived Kingdom of Phumph, which consists only of a king, a queen, a prince, and one subject, a young multi-tasker named Marvin (the same puppet as Leo from the Muppet Meeting Films), who becomes king by adopting a doorstep child, thus making the sun shine in the kingdom.

Finally, Kermit sings "If I Ruled the World" while sitting on top of a globe.

The Muppets then appear during the finale, "One to One." 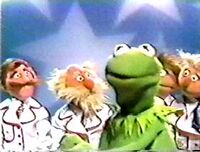 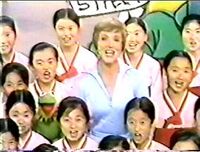 Julie and Kermit join the Choir 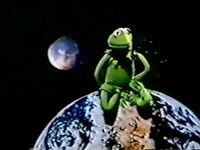 If I Ruled the World
Add a photo to this gallery

Retrieved from "https://muppet.fandom.com/wiki/One_to_One?oldid=1097970"
Community content is available under CC-BY-SA unless otherwise noted.