The flight contained no human crew, but carried cargo in the form of several items from Sesame Street: a cookie from Cookie Monster, Ernie's Rubber Duckie, Super Grover's cape, and Oscar the Grouch's pet worm Slimey. Following Slimey's 1998 story arc in which he and a crew of worms from WASA went into space, the Orion test flight marked the first time a Muppet actually went into space (although Muppet voices had previously been heard in space for two Pigs in Space sketches recorded exclusively for Space Shuttle Columbia’s STS-2 mission in 1981).

The items flew "some 3,600 miles above Earth and [would] come back to take prized spots on the Sesame Street set where millions of children will watch." NASA blog editor Steven Siceloff continued:

“The symbolism and chance to touch something that has been in space has proven a powerful enticement to those who can't make the trip themselves. Medals, flags, pins and patches that have ventured into orbit adorn museum displays around the world and are often placed in prominent locations in schools so students can ponder the universe and their effect on it.[1]”

The event was covered in social media by various accounts held by Sesame Workshop and NASA, and the items ultimately returned to their owners by astronaut Ricky Arnold on July 9, 2015.

Other items carried by Orion during the flight include a Captain Kirk action figure provided by William Shatner, an Iron Man coin, signed Back to the Future photos and DeLorean model, and a T. rex fossil on loan from the Denver Museum of Nature and Science.[2] 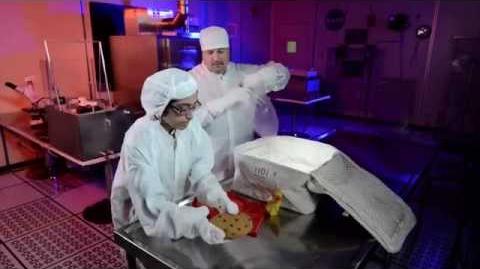 During the build-up to Orion's launch, NASA announced a media campaign advertise the event: "Over the next ten days, NASA and Sesame Street will share comic strips, videos and graphics of some of their most popular Muppet characters interacting with Orion concepts to help build awareness of human spaceflight, Orion’s flight test and NASA’s Journey to Mars."[3] 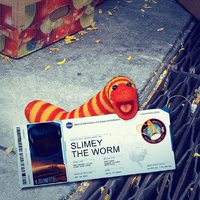 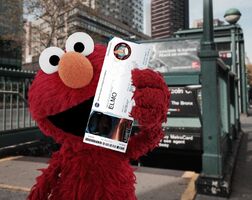 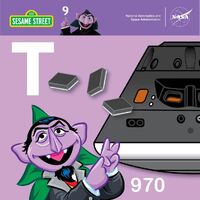 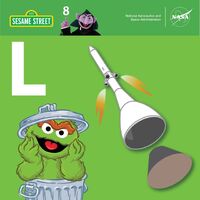 November 26, 2014
"#8daystogo until the Orion test flight launches! Did you know that there are three motors in the launch abort tower? The abort motor, attitude control motor and jettison motor. Wow!" 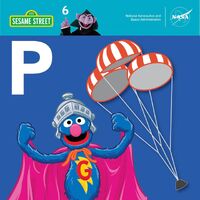 November 28, 2014
"No monster loves flying more than Super Grover! There are only #6daystogo until NASA's test flight. Did you know that Orion's parachutes have to perform well enough to make sure that future missions are safe? So good luck, parachutes!" 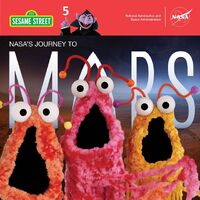 November 29, 2014
"5 days until launch! Orion’s first flight on December 4th is the first step in the Journey to Mars. The Yip Yips, Sesame Street’s Martian friends, are patiently awaiting our arrival. #SesameStreet #JourneyToMars" 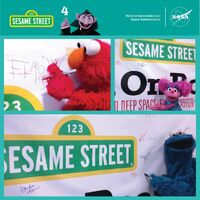 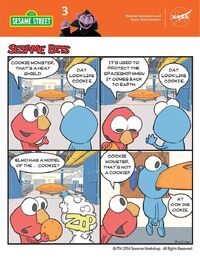 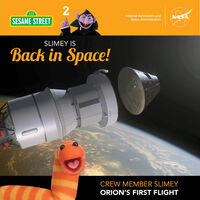 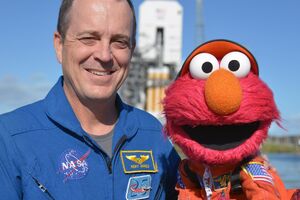 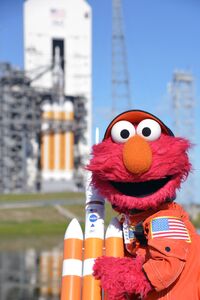 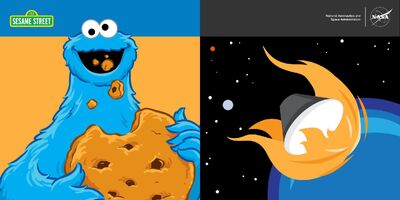 July 7, 2015
"Cookie Monster likes cookies straight from the oven. They look like Orion's heat shield, but are not as hot. During flight our heat shield protected us from 4000°F, 10 times hotter than temperature required to bake cookies. The temperature was caused by Orion slamming into the atmosphere at 20,000mph - this is much faster than most ovens can travel." 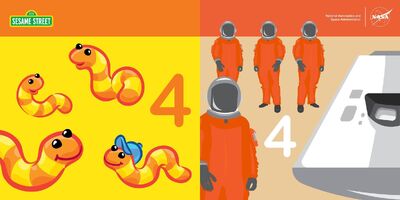 July 7, 2015
"Slimey's family Eartha, Dusty, and Sloppy welcome him home. Slimey flew on the Orion Spacecraft last December. Orion can carry a crew of 4. Slimey and his family are welcome on board!" 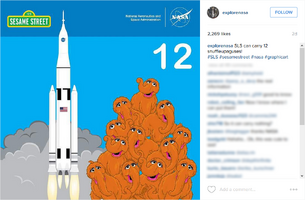 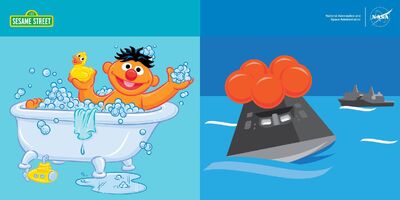 July 8, 2015
"Ernie's Rubber Duckie flew on Orion and landed in his bathtub! Orion landed in a much bigger bathtub after flight, the Pacific Ocean. The US Navy helped pull Orion out of the ocean just like Ernie puts Rubber Duckie up after bath time. Orion landed right on target and the US Navy used a single ship to scoop up Orion and take it to San Diego, California where it was put on a truck and driven to Kennedy Space Center in Florida." 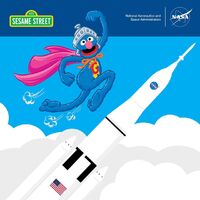 July 8, 2015
"Sesame Street's Super Grover is pretty fast when he flies through the sky. We have to be faster to break away from earth’s gravity." 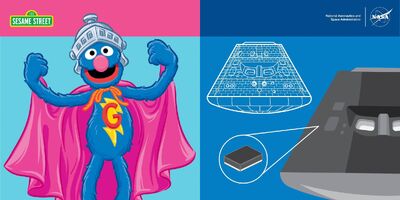 July 8, 2015
"Grover’s cape protects him and gives him super powers. More so now that it has been to space on Orion. Orion doesn't have a cape but we do have tiles that wrap around to protect us from heat and debris. The lightweight tiles are similar to ones used on the Space Shuttle and are used to cover the top part of Orion. Orion also uses a large heat shield on the bottom to protect it against the heat of reentry - 4000°F!" 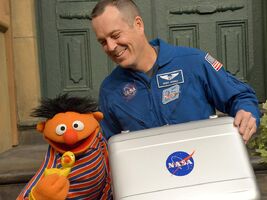 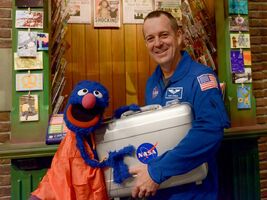 July 9, 2015
"On Orion @SesameStreet Super Grover's cape flew faster than a speeding bullet!"
Add a photo to this gallery

Wikipedia has an article related to:
Exploration Flight Test 1
Retrieved from "https://muppet.fandom.com/wiki/Orion_Flight_Test?oldid=1120145"
Community content is available under CC-BY-SA unless otherwise noted.