Oscar narrates his visit to the Grouch Jamboree, when Grouches and grouchy Monsters assemble for a carnival. Every Grouch at the Jamboree is in an individual trash can; they seem to hop around in their trash cans.

The first event is the Yucchy Car Rally, and Oscar hopes that his go-cart will win "ugliest vehicle". The prize is taken by Oswaldo.

Next is the contest for most disgusting food, and Oscar's super-deluxe sardine, anchovy and hot fudge sundae doesn't take the prize.

The next contest is for Yucchiest Pet, and Oscar hopes that his pets, Slimey the Worm and his noisy dog Betsy, will win this year. The judge awards the prize to Grundgetta, who has a muddy piglet. Oscar also loses the contests for Grouchy Crafts and the Pie Sling.

Frustrated with his string of losses, Oscar decides to get his Junk Band together to play for the grand finale. Oswaldo, Grundgetta, Travis and Filthomena join Oscar to play a crummy song.

In appreciation, the Grouches give Oscar a special award -- a pie in the face. He's thrilled. He even says "Now that's a prize to make a Grouch proud!" 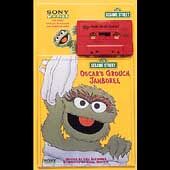