Oscar's Trash Race is a Sesame Street computer game created by the Children's Computer Workshop and Atari in 1983 for the Atari 2600 VCS.

In the game, the player helps Oscar the Grouch collect the trash. First, the player picks the numbered trash can that matches the number of items on the street. Then the player guides Oscar in his can to collect the items and race back to the starting line before Slimey reaches the other end of the screen.

It rains in later levels, and Oscar has to jump over mud puddles that appear in his way.

CCW worked with Atari to create a Kid's Controller for young children, with a large keypad. Each CCW game was packaged with a plastic overlay that could be placed on top of the keypad to help the child learn how to control the characters in the game. 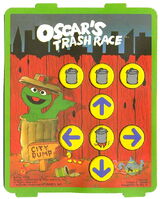 box back
Add a photo to this gallery

Retrieved from "https://muppet.fandom.com/wiki/Oscar%27s_Trash_Race?oldid=1098062"
Community content is available under CC-BY-SA unless otherwise noted.