Like Doctor Who’s TARDIS, the classic clown cars, or Snoopy's doghouse, Oscar's trash can is considerably deeper than one would initially suspect. The seemingly bottomless domain houses a variety of diverse Grouch amenities and luxuries which are mostly never seen.

In Episode 1419, Oscar builds a tunnel system from his trash can to the one in the Fix-It Shop, which he would be seen in from time to time for a few years (including Episode 1647).

Oscar shares his trash can with many pets. This diverse menagerie includes goats, a horse, elephants (notably Fluffy), a dolphin, and his favorite pet, his beloved pet worm Slimey. His niece Irvine, his girlfriend Grundgetta, his mother and other Grouch friends and relatives are frequent visitors.

Key exceptions have occurred over the years, however. While Big Bird was helping get ready for Miles' arrival on Sesame Street a lonely Snuffy entered to play catch with Fluffy in Episode 2122. Wanda Cousteau sought refuge in the trash can in Episode 3161 as a hiding place from the hungry Wolfgang. When Gina is studying to become a vet in Episode 3787, she goes down into the trash can through the back door and successfully removes a splinter from Fluffy's foot with some elephants' tweezers. In Episode 2316, Linda sat in the trash can when filling in for an "Ask Oscar" segment. When Buffy visited during season 12, she and Cody stayed in Oscar's can (in the Grime Room, according to Episode 1541). In one episode during Buffy's stay, Oscar turned his can into a Grouchaway Inn when Mr. Hooper, David, and Barkley (who was supposed to spend the night with David) both left their keys inside Hooper's Store after locking up.

The inside of the can was previously shown (mostly in the dark) in Episode 3271 where Luis enters to wake Oscar up from a nightmare. The inside was later shown in Episode 3997, though this time, the inside was a lot more like the normal inside of a trash can. Episode 2619 briefly showed Oscar sleeping on a couch, presumably inside his can, during a montage in the song "Sleepytime on Sesame Street". 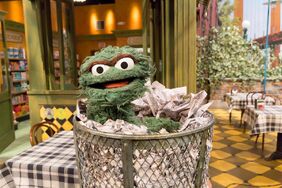 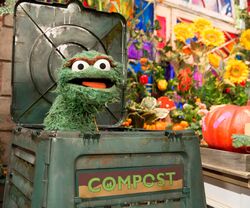 ...and a compost bin in the community garden. 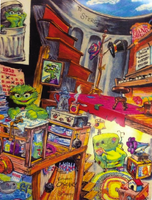 As seen in the book, What's in Oscar's Trash Can?, illustrated by Joe Ewers, where the story takes place entirely in the can. 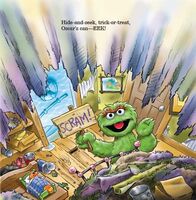 As seen in the book, What Makes You Giggle?, illustrated by Tom Brannon. 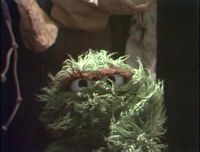 Detective Grover dives into Oscar's can in Street Mission.

The interior of the can as seen in Street Mission.